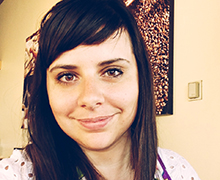 
For first year grad student Tania DoCarmo, the path to a Ph.D. has been anything but conventional. However, what her journey lacks in predictability, it makes up for in travels abroad, human rights work and practical, first-hand knowledge of human trafficking—her primary research interest. In fact, the sociology student’s proposed project on the subject recently secured her a fellowship through the National Science Foundation’s highly competitive Graduate Research Fellowship Program, which will fund her next three years at UCI.

Though her initial proposal to the NSF—involving a comparative study of humanitarian organizations in Cambodia and Ukraine—has been tweaked slightly, the focus of her current research remains rooted in the deeper understanding of counter-trafficking organizations. And after working for one such organization for more than nine years, she has some valuable insights.

DoCarmo’s interest in human trafficking is a direct result of her non-traditional route to academia. And though she has always loved learning, after her first year as an undergraduate at Biola University, she worried that she loved it a bit too much.

So, the then teenager decided to drop everything and move to Brazil—much to the vexation of her parents—to participate in a humanitarian training program. It was in Brazil that she met her now-husband, and two years after she left the U.S., she set off on another life-changing adventure, this time to Cambodia. It was there that she met a woman who had recently started a group called Chab Dai, a non-governmental organization dedicated to uniting activist groups and ending sexual abuse and trafficking in Cambodia.

After volunteering with the organization for a short while, she eventually took on a full-time position, helping to research and implement effective training methods. It was during her time there that she noticed how distrustful activists were of researchers and journalists.

“Through that experience I just realized the gap that exists between what activists and organizations are doing and what academics are doing,” she says. “Historically, researchers from big universities would come over and want to interview victims and do their research and then you would never hear from them again. There was a lot of mistrust and a lot of feeling like they didn’t understand the context.”

Despite the skepticism, DoCarmo rediscovered her love of academia, took classes online to complete her bachelor’s degree and subsequently earned her master’s degree in anthropology while still working for Chab Dai. She felt that this bad blood between activists and researchers was doing damage to both sides of the cause, and she began to imagine combining her education with her passion and expertise for activism to bridge the gap.

“Getting my master’s degree reminded me how much I like academics and how much I believe in research. It really built my conviction that to do good work we need to understand what we’re addressing—and we need research to do that.”

So, after nearly nine years with Chab Dai and several moves back and forth from the U.S. to Cambodia, DoCarmo and her family made the trek back to California where she began UCI’s sociology graduate program in 2014.

She is currently working on two research projects that have evolved from her research proposal to the NSF. The first, which she is working on in conjunction with Francesca Polletta, sociology professor, examines the use of storytelling and narratives within the activist community. As DoCarmo explains, there is sometimes a fine line between empowerment and exploitation, especially when the subject of a story may not be able to foresee all the potential ramifications of their participation.

“A lot of times, organizations will use a victim’s story to get donations or funding,” she says. “And while I see why people are doing that, my experience has been that stories can be very exploitative to the people whose stories you are telling.”

In addition to being manipulative, sharing a victim’s story can be damaging to their livelihood and reputation. DoCarmo explains that, in Cambodia, there is a very negative stigma associated with trafficking and prostitution. She has seen victims who are trying to move on with their lives be thrown back into a negative place when their community finds out that they had been sex workers. And there are even more sinister dangers—she notes that it is not uncommon for sex tourists to travel across the world in order to track down a woman that they saw in a documentary.

“Internally I’m still trying to wrestle with it, because I don’t think we should tell a victim what’s good or bad for them because they need to be empowered to tell their story if they want,” she says. “But we also need to be responsible for our part in it. So we’re interviewing organizations in the States and overseas and talking to them about how they’ve used stories—what’s been useful and what hasn’t been useful.”

In addition to this work, DoCarmo is also working on her own project that she hopes will help shed light on how human trafficking came to be a “new” social problem despite having been around for thousands of years. She believes that global interest in the issue became prominent after a 2000 U.N. convention that essentially coined “human trafficking” as a term.

She hopes to find out why, if trafficking has existed for centuries, was there a sudden explosion of concern about it. She’s seeking answers to her questions through archival research and hopes to, eventually, incorporate her work as a chapter in her dissertation, though that won’t be for several years. Her ultimate goal is to repair the bond between academics and activists in the counter-trafficking world, which she hopes will improve overall understanding of the topic.

“Sometimes when I read, there just seems to be a disconnect between how practitioners see a problem and how it’s written about in academia,” she says. “Through my research I want to reflect the practitioner’s view with the academic’s. I think together you have a better understanding.”

For now, DoCarmo is happy to be merging her two passions, academia and activism, while raising her two children with her husband. And with the NSF fellowship to help fund tuition and research expenses, she can spend the next three years focusing on how to make a difference.