Schatz speaks at meetings in France and Germany 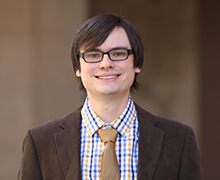 Schatz speaks at meetings in France and Germany


Jeff Schatz, a second year LPS student, presented a paper at a conference on "Varieties of Algorithmic Information,” in Heidelberg, Germany June 15-18. The paper, "The Randomness of Empirical Data, the Simplicity of Hypotheses, and Extreme Priors,” describes two formal approaches to the philosophy of science, due to Kevin Kelly and James McAllister, respectively, and then points to a tension that arises if one takes both approaches too seriously.  This tension concerns the role that data with random noise can play in confirming empirical hypotheses.  Schatz goes on to discuss how to modify one or both of these approaches to make them mutually compatible.  While in Europe, Schatz was also a panelist at a workshop entitled "Case Studies in Mathematical Practice," held in Paris June 29 - July 4, and a participant in the 6th annual PhilMath Intersem workshop series, which consists in a series of talks, also held in Paris, over the course of June.