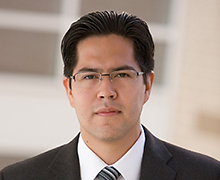 A cognitive scientist, economist and sociologist have been named 2015 recipients of research awards from the School of Social Sciences. Each honor carries a $5,000 prize.

Jose Antonio Rodriguez-Lopez, economics assistant professor, is this year’s recipient of the Social Sciences Assistant Professor Research Award. Established in 2005, the honor recognizes research excellence accompanied by a strong project proposal from a junior faculty member in social sciences. Rodriguez-Lopez joined the UCI faculty in 2007. His research interests include international trade theory and econometrics. He received a B.A. in economics from the Instituto Tecnológico y de Estudios Superiores in Monterrey, an M.A. in economics from El Colegio de Mexico, an M.A. in statistics from the University of California, Berkeley, and a Ph.D. in economics from the University of California, Berkeley. While at Berkeley, Rodriguez-Lopez was both a Fulbright Fellow and a UC MEXUS Graduate Fellow. His winning proposal is focused on trade, jobs, and productivity in China.

A member of the faculty since 2006, Bolzendahl studies gender, welfare states, political sociology, comparative sociology and family using quantitative methodology. She is the co-author of Counted Out: Same-Sex Relations and Americans’ Definitions of Family which received the 2011 William J. Goode Best Book Length Contribution to Family Sociology Award. Awarded annually by the American Sociological Association’s Section on Family, the honor recognized Bolzendahl's book as the best published on the family in 2009 or 2010. In her award winning title, Bolzendahl counts her most significant discovery as the change in Americans’ attitudes toward same-sex couples. Between 2003 and 2010, three surveys conducted by her research team showed an increase from 54 percent to 68 percent in the number of people who consider such committed pairs families. The trend is similar, she says, to that of interracial marriage; mixed-race unions were considered taboo and even prohibited for much of U.S. history, until a 1967 Supreme Court ruling that such bans were unconstitutional. Her research prize will fund work on gender and welfare state development.

Pearl specializes in language acquisition, computational learning theory, language change, and natural language processing. Specifically, she is interested in understanding long-term language change in terms of language acquisition by individuals. Pearl received a B.S. in computer science, a B.A. in linguistics, and a Ph.D. in linguistics from the University of Maryland at College Park. She’s a recent recipient of a $141,500 grant from the National Science Foundation to study strategies children use to learn the intricate structure of their native language, called syntax. Her associate professor research prize will fund work on deeper linguistic features for automatic detection of opinion spam.