How do human brains function? 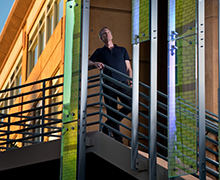 How do human brains function?


What is it about human brains that enable both the regulation of bodily activities and the generation of mental thoughts? What are the mechanisms of human brain function? How do they integrate to give the sense of mental unity? What happens when something in the brain goes wrong—abnormalities, injury, disease? What is the future of brain science?

Learn more, courtesy of PBS’ Closer to the Truth, featuring Donald Hoffman, UCI cognitive sciences professor. Hoffman is the author of Visual Intelligence: How We Create What We See and coauthor of Observer Mechanics: A Formal Theory Of Perception. He is a U.S. National Academy of Sciences Troland Research Prize winner and recipient of the American Psychological Association’s Early Career Award. He earned his bachelor’s in quantitative psychology at the University of California, Los Angeles and his Ph.D. in computational psychology at the Massachusetts Institute of Technology.

-photo and video courtesy of PBS