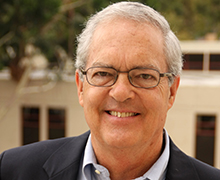 
Frank D. Bean, sociology and economics Chancellor’s Professor and director of UCI’s Center for Research on Immigration, Population, and Public Policy, has been named a UCI Distinguished Professor. The honor is considered UCI’s highest campus-level distinction for faculty.

For the past four decades, Bean has pursued research on international migration, unauthorized migration, U.S. immigration policy, immigrant integration (especially education), and the demography of the U.S. Hispanic population. He is the author or editor of over 200 scholarly articles and chapters and 21 books on these topics. At UCI, he co-led the large Immigrant Intergenerational Mobility in Metropolitan Los Angeles (IIMMLA) project that examined the integration experiences of several immigrant groups, focusing especially on the role unauthorized Mexican migration plays in limiting the attainments of Mexican-immigrant offspring.

He’s a two-time recipient of the Otis Dudley Duncan Award for Distinguished Scholarship in Social Demography, awarded by the American Sociological Association Section on Sociology of Population. In 2011, he received the Distinguished Career Award from the association’s Section on International Migration.

Another recent study revealed that immigrants have played a critical role in filling worker shortages in less-skilled jobs over the past two decades. Using statistics from the U.S. Census Bureau’s American Community Survey, he found that while the U.S. working-age population grew annually from 1990-2010, the number of less skilled, 25- to 44-year-old, U.S.-born workers with no higher education shrank at a considerably higher rate. At the same time, the number of less-skilled jobs in the economy remained constant, with foreign-born workers playing a critical role in keeping the U.S. economy afloat.

In April, Bean briefed members of Congress on the situation, noting that immigration reform was vital for filling what will continue to be a widening less-skilled workforce gap.

An elected member of the Council on Foreign Relations and a previous Guggenheim Fellow, Bean has also received prestigious competitively-awarded positions at the American Academy in Berlin, the Russell Sage Foundation in New York, and the Transatlantic Academy/German Marshall Fund in Washington, D.C.  He is a frequent panelist and invited speaker on issues pertaining to immigration and immigrant integration at meetings around the world.

Bean studied at Oberlin College and received a bachelor’s in sociology from the University of Kentucky and a master’s and Ph.D. in sociology from Duke University. He spent nearly 30 years as a professor at the University of Texas at Austin where he chaired the sociology department and founded the Center for Research on Migration and the U.S./Mexico Border. While on leave from Texas, he founded the Population Studies Center and RAND/Urban Institute Program for Research on Immigration Policy at The Urban Institute in Washington, D.C. Bean came to UCI in 1999 and in 2006 he was named a UCI Chancellor’s Professor.