Alumna vies to be ‘Top Chef’ 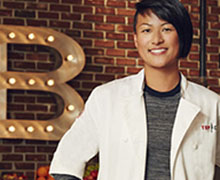 Alumna vies to be ‘Top Chef’


Anteaters are known for having sharp claws, not sharp knives, but that may change when UC Irvine alumna Melissa King joins the popular television cooking competition “Top Chef.”

She’s one of 16 “cheftestants” who put their culinary skills to the test in the show’s 12th season filmed in Boston and premiering Wednesday, Oct. 15, on Bravo.

Raised in Los Angeles, King earned a bachelor’s degree in psychology from UCI in 2005 and then enrolled at The Culinary Institute of America in Hyde Park, N.Y., graduating at the top of her class in 2007.

She lives in San Francisco where she has trained under several real-life top chefs including Ron Siegel (formerly of The Ritz-Carlton), Dominique Crenn of Atelier Crenn (the first woman in the U.S. to have a two-star Michelin restaurant), and Delfina’s Craig Stoll. King now works as a private chef for Kitchit, which provides chef-made meals in private homes.

Here, she talks about her UCI days, cooking and “Top Chef” – without spoiling the surprises in store this season.

You’ve said that you first learned to cook by helping your mother in the kitchen. What did you learn from her?

My mother taught me the basic fundamentals of home-style Chinese cooking. She taught me how to steam white rice, how to wash bok choy and how to hold a Chinese meat cleaver.

When did you decide you wanted to be a chef?

I started helping my mother put dinner on the table by age 6 and watched cooking shows while other children watched “Sesame Street.” I wanted to be a chef since I could remember, but my family suggested I explore it as a hobby in hopes that college would shift my career focus. I guess their master plan didn’t work out as intended.

Did you do much cooking during your undergraduate years at UCI?

While attending UCI, I lived off campus and would host a lot of dinner parties with friends or cook for my roommates, who were grateful for anything outside of ramen.My first professional job was at The Restaurant at the Getty Center as a pastry assistant and, eventually, a line cook. On my off days from school and nearly every holiday break, I found myself working there and loving every moment of it. It was my first taste of a real restaurant environment; I was hungry to learn as much as I could.

Did you learn anything at UCI, inside or outside the classroom, that helped you compete on “Top Chef”?

UC Irvine taught me how to interact with people from all walks of life. On “Top Chef,” not only do you have to compete, but you have to live with 15 other chefs from all over the nation, so I definitely had flashbacks to the roommate lifestyle.

You were a psychology major. Have you been able to apply what you studied to cooking?

Cognitive science has proven useful as a chef. There’s a lot of psychology behind managing a team of cooks in a hot, stressful kitchen, and it’s important to understand that not everyone will react the same under the same pressures.

What was the most challenging – and the most rewarding – part of being on “Top Chef?”

What’s your favorite thing to cook?

I’ve always enjoyed working with fresh seafood. I love butchering down a whole fish and utilizing the bones for the base of a rich stock.

How would you describe your style of cooking? What has influenced you as a chef?

I’m a farm-to-table chef with a strong foundation in classic technique. Every restaurant [I’ve worked at] has influenced me in one way or another, and you can see those influences when you taste my food.