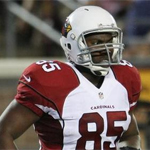 Darren Fells, sociology '14 and standout for the the UC Irvine basketball program from 2004-08, has earned a spot as a tight end with the NFL's Arizona Cardinals.

Fells is on the Cardinals' 53-man roster following final cuts August 30 and the waiver-claim deadline that passed August 31. He had seven receptions for 68 yards and one touchdown in four preseason games for Arizona.

The Cardinals open the regular season hosting the San Diego Chargers September 8 at 7:20 p.m. on ESPN.

The 6-7 Fells, who wears No. 85 with the Cardinals, is the first former UCI student-athlete to become a member of an NFL team's season-opening roster. UCI, which opened in the fall of 1965, has never had an intercollegiate football team.

"It has been a long process in trying to make this team, trying to prove that I belong on this team," Fells said. "Even though I am not where I want to be yet, I feel accomplished in the fact that out of all the people they could have chosen, I am one of the four tight ends that will start the year with the Cardinals.

"It is a long year and I still have a lot to prove and will continue to show my team and my coaches that they made the right choice in picking an Anteater to represent what it means to be an Arizona Cardinal," added Fells.

Fells ranks No. 3 in UCI basketball history in rebounding with 780 boards, is 12th in career scoring with 1,252 points and is tied for eighth in career steals with 103. He is one of five players in the history of the Anteater program to record at least 1,000 points and 700 rebounds in a career.

Fells led the Big West Conference in field-goal percentage (.569) and offensive rebounds at 2.78 per game as a senior in 2007-08. He was third in the league in rebounding (7.2), fourth in steals (1.59) and ninth in scoring (14.4). He was named to the All-Big West second team and was selected to the All-Big West Tournament team after averaging 16.3 points and 9.8 rebounds in UCI's four games.

During his four seasons at UCI, he played in 123 games with 103 starts.

He signed with the Seattle Seahawks as a rookie free agent in March 2013. He was waived on May 8, 2013 and re-signed with the Seahawks 12 days later. He was released by Seattle last August 31 and was signed to the Arizona Cardinals practice squad October 9, 2013. Fells signed a futures contract with the Cardinals on January 1 of this year.

Fells was an all-state tight end at Fullerton High School prior to joining the UCI basketball program. His older brother, Daniel, is a six-year veteran of the NFL and is currently with the New York Giants.