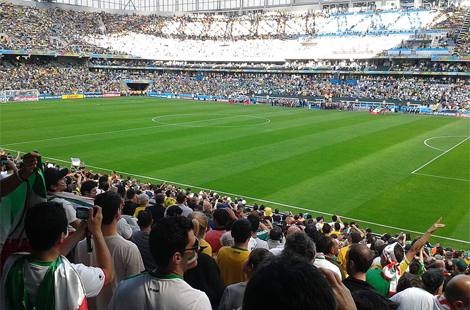 Millions of soccer fans around the globe watched as World Cup defending champion Spain was knocked out of the running for a repeat title by losses to the Netherlands and Chile. But UC Irvine cognitive scientist Michael Lee says the team to beat is host country Brazil. He’s basing this call on his “wisdom of the crowd” modeling skills which he’s put to work in partnership with Ranker - a website that solicits crowd opinions - to predict the outcome of the World Cup.

Previously, he used the site’s data to predict  celebrity deaths, sales of pizza toppings and movie takings at the box office in 2013.

Together with Ravi Selker, a visiting graduate student from the University of Amsterdam, and Ravi Iyer, chief data scientist from Ranker, Lee created algorithms to aggregate and analyze several types of rankings provided by the site’s users, as well as the tournament structure, in order to arrive at their prediction.

Results, compiled before World Cup play began, can be found online. They boldly – and what appears to be quite accurately – predicted that England wouldn’t make it out of group play while huge underdog Costa Rica would make it through. Their final tally puts Brazil in the lead, followed by Germany, Argentina and Spain. With only one of these teams currently out of contention, their predictions may be right on goal.