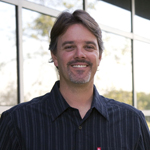 A new book on so-called mirror neurons and their role in human cognition by Gregory Hickok, UCI cognitive sciences professor, has received a positive review in the May 5 issue of Publishers Weekly. The news magazine called the work “an impressive handling of basic neuroscience that makes a complex topic understandable to the general reader as he delves into cutting-edge science.” The Myth of Mirror Neurons: The Real Neuroscience of Communication and Cognition uses scientific data and literature review to refute claims made about these brain cells’ roles in everything from language and empathy to autism and schizophrenia. Drawing on a broad range of observations from work on animal behavior, modern neuroimaging, neurological disorders and more, Hickok argues that the assumptions underlying mirror neuron theory fall flat in light of the facts. He then explores alternative accounts of mirror neuron function while illuminating a host of questions about human cognition and brain function: Why do humans imitate so prodigiously? Do animals imitate? How different are the left and right hemispheres? Why do we have two visual systems? Do we need to be able to talk to understand speech? What's going wrong in autism? Why does an echo of your voice on a bad phone connection make it hard to talk? Why can't you tickle yourself? Can humans read minds? The book will be available in August from W.W. Norton & Company.