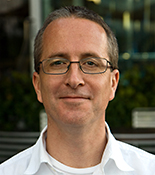 The School of Social Sciences has a new research center. Directed by Kai Wehmeier (pictured), logic & philosophy of science professor, the Center for the Advancement of Logic, its Philosophy, History and Applications (C-ALPHA) has been established to support collaborative research and visibility of findings on logical inquiry.

“There are a number of scholars across campus who study topics in logic – logicians, philosophers of logic, historians of logic, mathematicians and scientists – but we lack an appropriate forum to bring these resources together and stimulate new directions,” says Wehmeier. Housed in the School of Social Sciences, the center aims to provide a formal structure that strengthens existing and builds new cross-disciplinary connections.

Conferences, workshops and colloquia will provide internal and public opportunities for shared work on topics in logic. The center’s Logic Seminar will kick off this effort in 2014 while co-sponsored Southern California Workshops in Philosophy of Mathematics, Philosophical Logic, Philosophy of Logic and Foundations of Mathematics – put on jointly with the University of Southern California and UCLA – and the well-established UCI FregeFest will provide additional opportunities for collaboration with expert scholars in this area. The center’s faculty will also mentor and guide graduate student research while helping in recruitment efforts to bring to campus future scholars interested in expanding the field.

“We're particularly excited that C-ALPHA is already drawing large numbers of doctoral and post-doctoral visitors to UCI,” Wehmeier notes. “For winter and spring, the center will be housing visiting scholars from Australia, Korea, Germany, England, France and Sweden.”

As ties with logic centers around the world are forged, the vivacity of research activities is expected to increase over the coming months and years, he says.

“UCI is already one of the very best places world-wide to pursue studies and research in logic, ” he says.

“We have high hopes that, with the creation of C-ALPHA and its generous support by the School of Social Sciences and the campus at large, this position will not just be consolidated, but yet further improved. ”