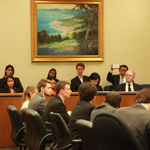 
A cashier at RacheterWorld Amusement Park claims she was held up at knifepoint by a former employee and told to empty the cash register.

The employee she saw was Cameron Poole.

Although security officers chased him down, Poole escaped through an unlit park ride operated by his friend and colleague Whitt Bowman.

Bowman was arrested as the alleged mastermind behind the robbery and is on trial for theft by deception and first degree robbery.

This is the case of the State of Midlands v. Bowman.

“The defendant didn’t pull the knife, but he pulled the strings,” said lead prosecutor Laureen Bousmail during her opening statement at the trial Nov. 24 at Harbor Justice Center in Newport Beach.

As lead prosecutor, Bousmail bares the burden of proof. The only problem is that it’s all made up.

Bousmail, 20, is vice president of UC Irvine’s Mock Trial team, which has been ranked first in the nation for two consecutive years by the American Mock Trial Association.

In 48 hours, she presented the same case four times at UC Irvine’s 7th Annual Beach Party Invitational, one of about a dozen competitions her team will attend this academic year.

Although the case is completely fictional, about 600 teams from colleges across the United States have spent months pouring over the details of the alleged crime. They’ve examined police reports and witness profiles and developed complex strategies to come out on top.

Each year, UC Irvine goes head-to-head with other top universities in the country to argue a single case and gain hands-on experience in a courtroom environment.

The mockers must argue both sides of the case. At each competition, they are required to present the case several times against different teams and different judges. Sometimes they serve as the defense, and sometimes as the prosecution.

Every trial brings a new experience and it’s important to think quickly and to constantly reevaluate the situation, Bousmail said.

She knows the case material inside and out. By prepping for both prosecution and defense, she knows what to expect from tricky witnesses and thoughtful cross-examination questions. But by playing on both sides, she’s able to gain greater insight and to think critically, she said.

“In the courtroom, when you’re up in front of a judge you have to maintain confidence and remain poised and be able to think on your feet no matter what happens,” said Bousmail. “You can’t let anything phase you. It’s taught me to be able to handle whatever comes my way.”

Bousmail says the exhilarating experience in the courtroom inspired her to pursue a career as a trial attorney. She is studying psychology and said her major has helped her understand how people think and what motivates them.

One class that has come in particularly useful is sports psychology, where she says she learned how to guide her teammates through stressful situations and calm herself down before a competition.

“In a way, it’s an intellectual sport,” said Bousmail, who describes herself as competitive by nature. “You really have to trust your teammates and rely on them. And if you’re a captain, you have to understand what motivates people and what doesn’t, how to talk to people and how to react to certain things.”

UC Irvine has three teams: two varsity squads that compete and one junior varsity crew. The teams are made up of a maximum of 10 people with three lawyers and three witnesses.

The UC Irvine Mock Trial team is selective. There are currently 27 members, and the team only accepts about 10 percent of students who apply and audition.

To make the cut, students must show confidence, the ability to stay calm under pressure and sound public speaking skills, said Bousmail.

The group is run by undergraduate students, volunteer coaches, and alumni founding-members who have remained connected to the team.

Misha Euceph, team president, said the team provides students with a chance to network with their peers as well as practicing lawyers, judges, and other legal professionals.

While the team is ideal for aspiring lawyers, not all members of the UC Irvine Mock Trial team are seeking a career in the legal field. Euceph, 21, is majoring in literary journalism and philosophy and hopes to pursue a career in the news industry.

“One of the major reasons I decided to come to UC Irvine was because of the mock trial team,” said Euceph. “When I came in the program was really good, but it didn’t have the reputation that it does now. People knew Irvine was a tough team, but now people go into the round and they’re really nervous and worried.”

The university’s mock trial team has built of a strong reputation, proving they can compete alongside regular front runners such as Harvard University, Rhodes College and the University of Maryland, College Park.

In the last six years, UC Irvine’s team has qualified for the American Mock Trial Association’s National Championship Tournament. In the last two years, the university placed in the top three.

The team’s consistent quality performance has led to a top bonus bid ranking by the American Mock Trial Association.

Johnathan Woodward, American Mock Trial Association tabulation director said that only the top 8 or 9 percent of about 600 teams compete in the National Championship Tournaments.

“That is a testament to Irvine’s consistency as a top performer,” Woodward said.

Rankings are important for ensuring tournaments are well balanced in terms of team strengths, he said. But these high rankings don’t ensure stellar performance.

“Unlike college football and basketball polls, it’s not a subjective ranking of present performance,” he said. “However, it’s fair to say that the teams with the highest BBR rankings have had the highest levels of success in recent memory.”

For instance, Florida State University, the previous national champion team, is ranked 14th by the American Mock Trial Association. This is because it was a breakout year for the university, Woodward said.

“Since our rankings look back at the past three years, Irvine gets credit for a more consistent high level of performance as opposed to up-and-down years,” he said.

But having a strong reputation is not without its burdens, said Euceph.

“It’s tough,” said Euceph “The reality is when you come in year after year with such a strong program and you’ve built up that reputation for yourself, people are expecting to be afraid. You have to work hard enough to be at that level year after year.”

“We can never walk into a courtroom and disappoint,” said Euceph. “We don’t have that luxury. Lesser known teams can make mistakes and learn from them and lose. It’s not that big of a deal. But for us, every single ballot, every single point, and every single competitor’s performance matters. Private schools have such huge endowments and all these coaches and a huge alumni network of professional attorneys working with them. We’re just a public school. We’re not expected to be doing this well.”