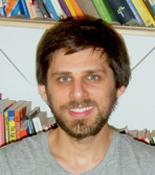 Berlin’s research focuses on issues involving international law and human rights including the design of international treaties, the spread of international law to domestic legal systems, and compliance with international arrest warrants. The latter was the topic of his winning paper, “Why (Not) Arrest? Third-Party State (Non)Compliance with the International Criminal Tribunal for Rwanda” which he presented last year at an academic conference in Canada. His dissertation examines the worldwide diffusion of national criminal statutes pertaining to human rights violations, specifically genocide, war crimes and torture. His research has been supported by the Center for Global Peace and Conflict Studies and the Center in Law, Society and Culture. This fall, he will be a guest researcher at the Peace Research Institute in Frankfurt, Germany. Berlin holds a bachelor’s degree in music from Berklee College of Music in Boston. Feintzeig received his bachelor’s degree in physics and philosophy from Dartmouth College. His research focuses on the foundations of quantum mechanics. In particular, he studies how quantum mechanics differs from classical physics with regard to probability and determinism, which served as the topic of his winning paper, “Hidden Variables and Commutativity in Quantum Mechanics.” In 2012, he received a prestigious National Science Foundation Graduate Research Fellowship and this year, he was named one of the 2013 recipients of the Justine Lambert Graduate Prize in the Foundations of Science. He has presented his work at international conferences in Canada and Germany.