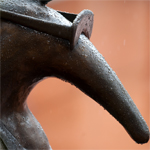 Benjamin Feintzeig and Cailin O'Connor, logic & philosophy of science graduate students, have been named 2013 recipients of the Justine Lambert Graduate Prize in the Foundations of Science.

The honor, established by a generous bequest from the sons and friends of Justine Lambert, is awarded every other year to the best submitted graduate paper dealing with the foundations of the formal, natural or social sciences.

The students will each receive $1000. O'Connor is a third year graduate student; Feintzeig is in his second year of graduate study at UCI.