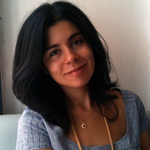 A sixth year student, Nucho studies the notion of sectarianism in Lebanon and the way in which infrastructures, services and municipal planning create a sense of community as well as the conditions of possibility for various forms of conflict along sectarian lines.

“Often in the media, it’s just assumed that conflict between ethnic and religious groups is something natural or inevitable,” she says. “I hope to show that the pathways to a sectarian sense of belonging are something constructed, not inevitable, and provide a different means of analysis.”

With an interest in ethnographic filmmaking and Middle Eastern studies, she says UCI’s anthropology department made the most sense for what she was trying to do in terms of in-depth research in the Middle East.

“Pursuing my graduate degree in anthropology allowed me the opportunity to spend a long time in my particular field site, about a year and a half,” she says. “This is something I would never get to do if I was simply researching for a documentary. It’s an entirely different mode of engagement.”

Among her most memorable milestones, she counts having one of her documentaries premier at the London International Documentary Film Festival in 2008. She has previously received funding from the Wenner Gren Foundation, Fulbright Hays, Center for Citizen Peacebuilding Fellowship and Coalition Advocating Human Security Fellowship.

Nucho is currently trying to plan a summer filmmaking workshop for teenage girls in Lebanon, an idea that grew out of an engagement with the community where she conducted her research. After completing her degree, she hopes to teach anthropology and continue making ethnographic films.