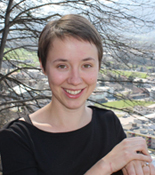 What made you decide to pursue your Ph.D. in logic & philosophy of science?

I studied biology and filmmaking as an undergraduate at Harvard College, and I was interested in the neurobiological underpinnings of aesthetic preference. While applying for graduate study, I realized that the best discipline for pursuing this research was philosophy of science. My research plans eventually changed, but the discipline stuck. I currently study the evolution of language, and of information transfer more generally. Specifically, using tools from evolutionary game theory – a discipline that looks at how and why behavioral strategies evolve – I’ve investigated the evolution of vagueness in language. I’m also looking at how organisms learn to categorize things in the world while simultaneously learning how to communicate about them.

What interests you most about your graduate program?

I love philosophy of science because it allows for a great deal of interdisciplinary research. For example, my current research projects appeal/respond to previous work in biology, psychology, cognitive science, mathematics, and philosophy.

Do you have any upcoming publications or talks?

My first paper was just published in Analyse & Kritik. It was joint work with one of my advisors and several other graduate students. It addressed how and whether observations from biology and anthropology can inform ethics. I have a research paper entitled ‘The Evolution of Vagueness’ that has been accepted for publication in the journal Erkenntnis. It argues that certain learning strategies employed by human agents lead inevitably to languages where terms have vague meanings. I also have an upcoming symposium at the Philsophy of Science Association meeting where I will present a paper on the evolution of linguistic and perceptual categorization.

What unique circumstances/life experiences have had an impact or played a major role in where you are today?

My husband is also a philosopher of science. While it’s unusual to work and live with the same person, I think both of our academic careers have benefitted greatly from the arrangement. It’s very convenient to have a (in my opinion) brilliant philosopher across the dinner table to argue things out with.

We have four cats named Chairman Meow, Margaret Catcher, Catsius Clay, and Caterine the Great. In retrospect, I would have named one of them Winston Purrchill. Also, I’m expecting twin girls in November. I suspect it will be a pretty major milestone!