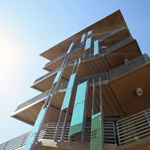 Alyssa Brewer, cognitive sciences assistant professor, and Julia Elyachar, anthropology associate professor, have been named 2011-12 recipients of research awards from the School of Social Sciences. Each honor carries a $5,000 prize.

Brewer is this year’s recipient of the Social Science Assistant Professor Research Award. Established in 2005-06, the honor recognizes research excellence accompanied by a strong project proposal from a junior faculty member in social sciences. A visual neuroscientist, Brewer uses brain imaging and behavioral research to gain a better understanding of the organization and functions of the regions of the brain devoted to processing visual information. Her supported research project focuses on visual rehabilitation therapies for stroke victims. She has been a member of the UCI cognitive sciences faculty since 2007 and holds a Ph.D. in neuroscience and an M.D. from the School of Medicine at Stanford University.

Elyachar is the inaugural recipient of the Social Science Associate Professor Research Award. This new award recognizes research excellence and a project proposal by a newly tenured faculty member in social sciences. Elyachar, who also joined the UCI faculty in 2007, has extensively studied the anthropology of the Middle East. Her main site of ethnographic research is Cairo, Egypt. Following the January 2011 uprisings, Elyachar organized public events and a special online feature in Cultural Anthropology called “Revolution and Counterrevolution in Egypt.” Her supported project builds on this previous work to examine the role of communications technologies in the Egyptian uprisings. Elyachar has a master’s and doctorate in anthropology and Middle Eastern Studies from Harvard University.