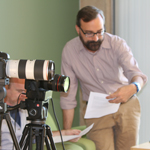 UC Irvine will anchor a new $12.5 million, Intel-funded research center that applies social science and humanities to the design and analysis of digital information.

"Technology is profoundly entangled with our everyday lives. As researchers, we can't get a handle on what's going on by looking at technical factors alone. We have to study them in concert with human, social and cultural aspects," said UCI informatics professor Paul Dourish.

He and Scott Mainwaring of Intel Labs will co-lead the center, dubbed the Intel Science and Technology Center for Social Computing, along with UCI anthropology and law professor Bill Maurer.

Justin Rattner, Intel chief technology officer, announced the new center this morning in San Francisco at the Research@Intel 10th anniversary event. "Intel's latest ISTC will establish a new computing paradigm to bridge the gap between technical and social disciplines and create new ways for social scientists, designers and technologists to collaboratively inform, challenge and advance each other's' work," he said.

Maurer, associate dean of UCI's School of Social Sciences, agreed: "Computing today is social through and through, and that is redefining the very nature of how we experience ourselves as persons. Information design needs to be supplemented by disciplines with long histories of wrestling with social and technical relationships."

Intel researchers will work side by side with academics in campus labs. The research is not proprietary and will be public, open intellectual property. Mainwaring, senior research scientist with Intel Labs' Interaction & Experience Research group, has already moved into an office at UCI's Donald Bren School of Information & Computer Sciences.

"I'm tremendously excited," he said. "I've been working for the past decade with Paul Dourish and Bill Maurer on a number of collaborations, and this is a chance for me to really get engaged with the whole academic community here at Irvine."

UCI will serve as the center's hub, with four other campuses participating: Cornell University, Indiana University, the Georgia Institute of Technology and New York University. Those involved will include experts in anthropology, media studies, digital humanities, philosophy and computer science, among others.

Plans encompass everything from holding virtual five-campus seminars to creating product prototypes. Mainwaring said he and others could bring valuable business-world perspective to the work.

"There's a great opportunity here. There's also a challenge, because we're dealing with rigorous theory based on social science," he said. "A major focus for the Intel researchers based here will be to bridge this divide, to help frame our findings in ways that can have real-world impact within our company and elsewhere."

UCI will receive $5 million over a five-year period, with another $7.5 million split among the other universities. A defining theme will be explored annually. The first concerns restoring "materiality" to information - such as examining the carbon footprint and other tangible costs and effects of invisible processes.

The grant is part of Intel's larger, $100 million program to increase university research and accelerate innovation. Anchored at leading institutions across the nation, these collaborations build research communities focused on specific technology areas.

Maurer said the effort dovetails with a strong history of joint projects at UCI since its inception nearly 50 years ago. "It's in our DNA to be interdisciplinary," he said.