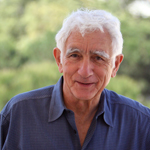 Frank Cancian, anthropology professor emeritus, is the recipient of the 2012 Outstanding Emerita/us Award. Awarded by the UC Irvine Emeriti Association, the honor recognizes Cancian for his continued commitment to the university’s mission of teaching, research and service since his retirement in 1999.

In the 13 years that have followed, Cancian has served as a volunteer mentor to undergraduate students.

In 2006, he published Orange County Housecleaners, a photo ethnography that documents the lives of seven women who make their livings cleaning houses in Orange County. La Casa del Libro in San Francisco and the Irvine Fine Arts Center hosted exhibitions of this work.

In 2009, Cancian began taking pictures of the activity around UCI’s Ring Road, and over two and a half years, he collected more than three thousand photos of life on what he calls “Main Street UCI.” He showcased some of these images at the Irvine Fine Arts Center in 2011 and on campus in spring 2012. In conjunction with the photos, he also led an online blogging project to collect from students, faculty, staff and alumni their UCI experiences which are now part of the campus’ official history, archived with UCI Libraries.

Cancian was honored at the UC Irvine Emeriti Association annual meeting on June 5, 2012.

Click here to learn more about his academic work.
Check out his Main Street UCI blog here.
Click here to view some of his documentary photography work.