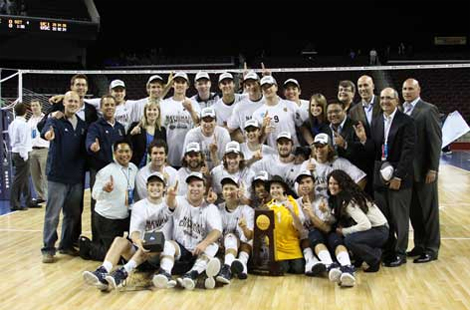 Top-seeded UC Irvine earned its third national men’s volleyball title in six years with a 3-0 sweep over No. 2 seed USC in the NCAA Championship match Saturday night at the Galen Center. The Anteaters cut down the net and collected pieces of the floor as souvenirs after sociology major Dan McDonnell's second ace ended the match (25-22, 34-32, 26-24) before a packed Galen Center. Stay tuned for more information on a campus celebration.

“Everyone will see it was 3-0 but everyone knows how close it really was all the way through,” coach John Speraw said. “We didn’t get rattled and stayed very poised when we were down big in the second set. It was a tight emotional first game and we took a breath there. I think when we won that second game it was real tough for them. It’s hard when you have a lead and then you’re down 0-2."

Senior All-American Carson Clark, sociology, had a match-high 22 kills, hitting .465, and added eight digs and three service aces as UCI (26-5) topped the Trojans for the second time in nine days.  The Anteaters had rallied from a 0-2 deficit to defeat USC in an MPSF semifinal match at the Galen Center April 26.  Clark was named the NCAA Most Outstanding Player and also had three aces and eight digs.

Austin, Tillie and Hughes were named to the All-Tournament team.

UCI opened a 14-10 lead in the first set on an ace by Carson Clark and a block by Scott Kevorken and Chris Austin. The lead was short lived as Tony Ciarelli's tough serving led the Trojans back to a 14-13 margin. The Anteaters held a 19-16 lead but USC went on a 4-1 run to tie the set at 20-20. Four consecutive kills by Clark, Kevin Tillie, Chris Austin and Kevorken put UCI ahead 24-20. Ciarelli once again stepped back to serve and the Trojans to 24-22. A kill by Clark ended the set

USC scored four unanswered to take a 9-4 lead in the second set and held a 15-8 margin before UCI went on an 8-2 spurt to narrow the margin to 17-16. A service error stopped the rally, but kills by McDonnell, Hughes and Clark gave the Anteaters the 19-18 advantage. Another Anteater service error plus a Trojan kill helped USC regain the lead, 20-19. Teams would trade points until they were deadlocked at 31-3. A Clark kill was followed by a Trojan service error to give UCI set point, 33-32. Clark pounded a kill to end the marathon, 34-32.

A kill by Hughes, a Trojan attack error and an ace by Clark gave the Anteaters the 12-8 advantage in the third set. The Anteaters could not hold on to the lead as USC would tie the set at 19-19.  The Trojans would score two straight to go on top 21-20. The teams would battle back and forth until McDonnell had a solo block and Clark put away his kill to give the Anteaters match point 25-24. USC called timeout before McDonnell stepped back and fired an ace for the victory.