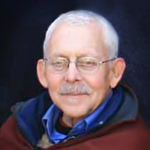 Lawrence Howard, a retired lecturer in the School of Social Sciences and Department of Cognitive Sciences and specialist in the UCI Disability Services Center, passed away at home on March 28, 2012.

Howard was a favorite lecturer for many years.  His passion for global affairs, politics, and peace was obvious in his desire to educate his friends and colleagues on current social issues.

He began teaching courses on the arms race and nuclear conflict while still a graduate student in psychology at UCI in 1983. Having completed his Ph.D. from UCI in 1986, he became a junior specialist in the School of Social Sciences, supported by a grant from the Sloan Foundation, and continued as a lecturer.  He taught broadly in cognitive sciences, political science, and for the social science major.  Long associated with the Center for Global Peace & Conflict Studies, Howard's courses ranged from seminars on nuclear arms and alternative securities to large lecture courses on human memory, people in society, and psychology. He retired in January 2010.

Recently, he came out of retirement to support the work of the Disability Services Center (DSC) and was working closely with students. Additionally, the DSC was honored to host "Talks with the Doc," in which Howard helped undergraduates learn ways to improve their interactions with faculty and make the most of their collegiate academic experience.

With his calm and nurturing way and a fabulous sense of humor, he made quite an impact on the students he taught and the colleagues with whom he worked. He will be deeply missed.

In conjunction with his family and friends, a memorial service is planned for 4:00 p.m. on May 16 in the Social Science Lower Plaza.

The Disability Services Center has established the Lawrence A. Howard Scholarship Fund. Those wishing to contribute to this fund may use the following link: http://www.uadv.uci.edu/DisabilityServicesScholarship.