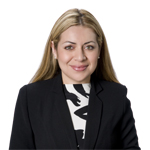 At 30 years old, Nadia Bermudez, political science ’98, was named one of the top 40 most influential leaders under the age of 40 by San Diego Metropolitan Magazine. A year later, she became the youngest elected president of the city’s bar association for women, the Lawyers Club of San Diego. In the three years since her term ended, the ’01 Stanford Law grad has served in a host of legal leadership positions including chair-elect of the ABA’s Committee on Employment Law and Litigation, member of the board directors for the San Diego County Bar Association, and president of the San Diego La Raza Association – all while maintaining an active caseload as a business and employment litigator.

Her work has been highly lauded by the State Bar Association of California and the San Diego Volunteer Lawyers Program. In 2009, she caught the attention of U.S. Senator Dianne Feinsten who appointed Bermudez a member of the Advisory Committee for the Southern District of California. For the past three years, the young trial attorney has assisted in recommending nominees for the positions of U.S. District Court Judge, U.S. Attorney, U.S. Marshall and U.S. Magistrate Judge.

Despite her busy schedule – which includes being a new mom to 6-month-old son Samuel – Bermudez still finds time to give back to her UCI alma mater. She frequently serves as a guest speaker and helps raise funds for the School of Social Sciences Summer Academic Enrichment Program (SAEP), a five-week residential program designed to help first-generation students develop graduate-level research, analytic, communication and quantitative skills. A first generation undergrad herself from El Centro, Bermudez participated in SAEP while at UCI and credits the program with helping to prepare her for Stanford Law.

Below, the accomplished alumnus and recipient of the 2012 Lauds & Laurels Social Sciences Distinguished Alumnus Award comments on her career in law, obstacles she’s faced on her road to success, and how UCI alums can get involved in shaping future leaders.

Q: What made you decide to pursue a legal career, and why did you start it with UCI?

A: I followed in the footsteps of my older sister, Ruth Bermudez Montenegro, who is now a Superior Court Judge in Imperial County. In fact, she was the person that convinced my father to let me attend college straight out of high school, instead of attending junior college first.

The respect and formation of our laws is what makes the United States special. My parents, like many other immigrants, were drawn to the United States because it offered opportunities and access. Such doors are open because of laws that exist that keep it that way. The law is dynamic and evolves, which makes it very interesting to me.

UCI had – and still has – a great reputation for academic excellence in a beautiful environment. Additionally, UCI offered various benefits to me associated with my selection into the Campuswide Honors Program. I was also given a chancellor’s scholarship.

Q: What challenges have you faced in getting to where you are today? Do any mentors or role models stand out as instrumental players in your success?

A: I grew up in a rural town with immigrant parents. Nonetheless, all of my brothers and sisters attended college. My younger sister, Eran Bermudez, is a 2002 UCI graduate and also a UC Berkeley Boalt Hall School of Law grad. My older sister is a UCLA Law School graduate. My brother, Sal Bermudez, is an elementary school teacher and my other brother, Cesar Bermudez, works for the gas company. I am so proud of my siblings and of my parents, who did not have much in the way of formal education. They taught us a powerful, no-excuses work ethic that still serves me today.

My older sister, Ruth, is definitely a role model for me. She is a consummate professional. When I am tempted to respond in a less than professional manner in litigation, I remind myself of my sister’s grace in conducting myself in a more positive manner. At UCI, professors Ceasar Sereseres and Mark Petracca, and my advisor, Ramon Munoz, were also great mentors.

Q: What was the significance of SAEP to you, and do you have any advice for alums who may be interested in getting involved ?

A: The Summer Academic Enrichment Program, which my sister Eran and I both participated in, is a stand-out program. It fostered an environment for excellence and provided amazing support for those seeking post-graduate education. I pursued research on electoral politics of my hometown which I then finalized as my honors thesis for the Campuswide Honors Program. I studied the electoral patterns and impact of Latinos in an area with a high percentage of Latino population, but a low voter turnout. This research sparked my curiosity and involvement in political campaigns. My involvement in public affairs since has given me access to decision makers and also has helped to raise my leadership profile in San Diego.

From time to time, I am asked to speak to SAEP students, which is such an honor for me.  Alums can give back to UCI by participating in mentorship and sharing their experiences as successful professionals.

Come celebrate Nadia’s accomplishments with the School of Social Sciences at the 42nd UCI Alumni Association Lauds & Laurels Ceremony May 17, 2012 to be held in the UCI Student Center. Click here for further information.