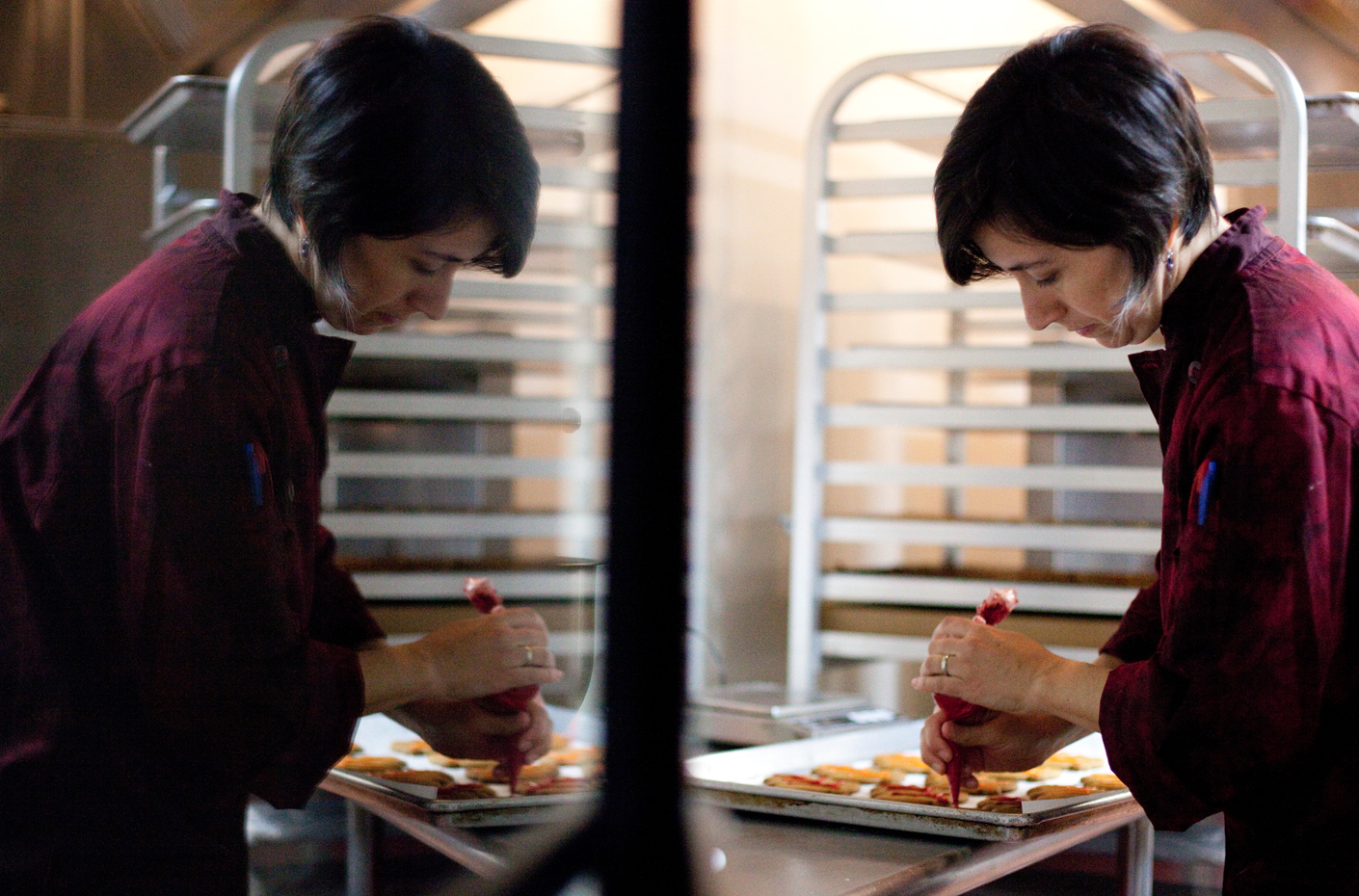 She ditched Derrida for dough — pastry dough, that is.

With only one semester behind her, she figured out she'd taken the wrong path.

"It was very heavy theory — Jacques Derrida and critical theory. I didn't fit in. I'm more of a practical, hands-on kind of person. Cause and effect — if I do this and do that, stir this together, I'll get this."

It would take her a while to find the right recipe. She had never aspired to enter the food world, even though her 94-year-old grandmother is "a really good baker" of Southern staples. Her palate was piqued when she met David at University High School in Irvine. His parents were foodies, and they passed their appreciation to their children.

"We'd go to Il Fornaio and Campanile, and I was just blown away. I didn't know anything about the fancy food world."

Eventually, the mother of four children ages 11-18 graduated from the Culinary Institute of America in Napa in 2002. After working at Zov's in Tustin for a year, she branched out on her own.

A rebel at heart, Klemek decided against renting a kitchen first and, instead, set up her own shop in an unconventional location: an industrial office park across from the Orange County Airport.

"When you don't plunge in, it's so easy to never do it," she explains. "Commit and make it work."

And you'll want to, especially if the temptation is a deeply rich chocolate brownie concocted with a secret ingredient: wine flour. Made from the dried grape skins and seeds left over from wine production, the wine flour adds nutritional benefits. High in iron and fiber, it also contains Resveratrol, a "natural antioxidant recognized for its significant health benefits particularly in relation to heart diseases and cancer," according to the website.

Klemek also has fashioned wine flour into dried pastas, which are growing more popular under her Marché Noir label. While her custom cakes give the Ace of Cakes stiff competition, Klemek says, "The wine flour products have been a turning point for us."

While operating on a "shoestring budget," Blackmarket Bakery has built a legion of followers. OC Weekly named it the "Best Bakery" in 2010 and reviews have appeared in The Wall Street Journal, Westways, and Shape magazine. Even Italian Elle has called.

"All we've ever done has been guerilla-style marketing," she laughs.

One bite and the goods sell themselves. As another motto claims, "Resistance is futile."

Klemek says anthropology studies at UCI opened her mind to different ways of doing and being. "In a way, we're building our own little culture," she explains. "We've always been outsiders. David and I were both kind of punks in high school. And I think that's what attracted us to each other."

One tradition that Klemek fiercely embraces is commitment to flavor. "Substitutes can often sacrifice flavor," she says. "Flavor and texture are the most important things."

On Saturday mornings, Klemek and her staff bring those often unconventional flavors to the farmers market across from the UCI campus. She also enjoys teaching classes at the bakery.

"People get intimidated by cooking shows online or celebrity chefs. They're frickin' scary. They scare me!" she admits. "But if you start to let your guard down — and make it fun, it's all about the process. It doesn't have to be perfect. We just want to learn as we go and not be afraid to take a risk."