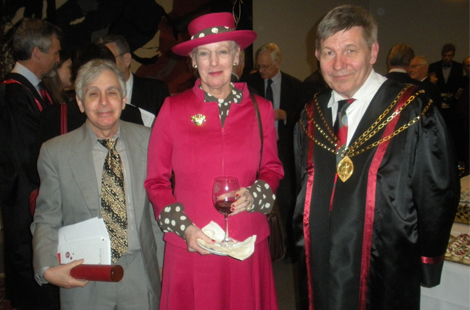 UC Irvine political science professor and Jack W. Peltason Endowed Chair Bernard Grofman has received an honorary doctorate in political science from the University of Copenhagen in Denmark. The honor recognizes Grofman, who also directs UCI's Center for the Study of Democracy, for his work on voting theory, voter behavior, electoral systems and parliamentary processes. Also a leading authority on representation and redistricting, Grofman has served as an expert witness in key court cases around the U.S and is currently spending the fall quarter as a scholar in residence at the New York University School of Law.   Grofman was recognized at a November awards ceremony in Denmark which was attended by the Queen of Denmark (pictured center with the University of Copenhagen rector at right and Grofman at left) and the country's Prince Consort. Joining Grofman in receiving honorary recognition were seven others, three of whom included U.S. honorees from the University of California at San Diego, University of Chicago, and Harvard University.