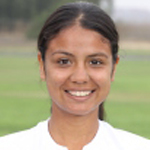 Mar Rodriguez, a UC Irvine sophomore in sociology and member of the women’s soccer team, took her game to the world stage this summer by playing for Mexico in the FIFA U-20 Women’s World Cup in Germany.

During her first year at UCI, forward Rodriguez made the record books with four game-winning goals. For the season, she had five goals and two assists and didn’t miss a match for Anteater head coach Scott Juniper’s squad.

“I think what helped me make the final cut for the Mexican national team was that I did fairly well my freshman year,” says the Santa Ana resident, who endured several rounds of tryouts beginning last spring in Pomona. Rodriguez, who was born in the U.S. but whose parents were born in Mexico, has dual citizenship.

The Mexican under-20 team, led by head coach Roberto Medina, trained for only a month before heading to Germany. “It wasn’t a lot of time to get used to the way they play,” says Rodriguez, “but I focused on making the team first and then trying to fit in as best I could.”

After sitting out a 3-3 draw with Japan in the tournament’s opening match, she found herself in the starting lineup for Mexico’s second game and played the full 90 minutes against England, helping her team to a 1-0 victory.

Rodriguez earned another start in the third match, against Nigeria, playing 74 minutes as Mexico advanced to the quarterfinals against South Korea. She was in the starting lineup again for that game, which Mexico lost 3-1.

“The experience was as intense as I thought it would be, but I tried to keep calm,” Rodriguez says. “Once I was in Germany, all I did was think about soccer: how to make myself a better player and how to help the team win and make history.”

“We are all so proud of her,” says Juniper. “Just coming to UCI was a huge step into the unknown for her. Less than a year later, she’s competing in a World Cup in Germany.”

Rodriguez, who played soccer at Santa Ana Valley High School, never saw herself going to college. Now she wants to show others that higher education is possible.

“It’s not easy to grow up in a community with limited resources for education, and many kids don’t think college is an option,” she says. “I didn’t think it was, either. But there were people who cared about me enough to teach me that, with hard work, I could do it.

“My greatest role model is my mom. She raised my two sisters and me by herself. She’s always been paid minimum wage, and she didn’t receive help from my dad. She’s the one who taught me to work hard.”

Juniper says of Rodriguez: “She has matured a lot both on and off the field; she’s stronger and more confident. If she continues to focus on the next challenge, the sky’s the limit. Learning how to manage academic and athletic demands is something that takes a lot of discipline for all of our student-athletes, and Mar has shown she can do this effectively.

“Her work ethic is incredibly high, and she’s always trying to improve herself. She’s a credit to her family and the teachers and coaches who have supported her development along the way.”

So far this season, the UCI women’s soccer team is 3-1-1, with Rodriguez starting in all five matches and making one goal. The Anteaters next play at Pepperdine Friday, Sept. 10, and then host San Diego Sunday, Sept. 12.

Trustees of the Santa Ana Unified School District recently invited the former student to speak about her World Cup experience at a board meeting, but Rodriguez downplays the honor, saying: “I feel like there’s nothing to celebrate yet because I haven’t accomplished my No. 1 goal – getting my degree at UCI. Once I do that, I can say I represented the Santa Ana community proudly.”