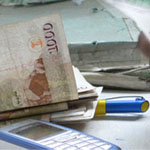 
When a 7.0 earthquake struck Haiti eight months ago, it toppled the country’s already struggling infrastructure.  With funding from UCI’s Institute for Money, Technology and Financial Inclusion, a team of researchers is studying how communication technologies like the mobile phone can be used to help rebuild and establish new financial services in the disaster stricken region. “Most Haitians possess little access to banks and other key financial services which means moving money is challenging and time-consuming,” says Heather Horst, a researcher with IMTFI and UC Humanities Research Institute.  “The earthquake, especially efforts to distribute relief money and goods, made this tenuous system more visible.”

She is leading an IMTFI research team which, prior to the January 12 earthquake, was studying how mobile phones were being used in Haiti and the Dominican Republic for economic and social wellbeing.  With financial services and their effective delivery one of many infrastructural casualties resulting from the earthquake, the team’s research and its potential applications have taken on a new – and more urgent – sense of importance.

“In the developing world, mobile phone-based financial services are being seen as an agent for economic security and empowerment because phones are accessible, even to people who cannot afford to own one,” says Bill Maurer, anthropology professor and IMTFI director.  In 2008, he established IMTFI with a $1.7 million grant from the Bill & Melinda Gates Foundation to support on-going research on how technology is and could be used for monetary transactions in developing countries.

This month, the foundation awarded the institute an additional $363,849 in research support, bringing IMTFI’s total foundation funding to $2,055,536 in just two years of existence.

“We know very little about the informal money transfer and savings behavior before new mobile services get rolled out, so funding for ground-level research will help us to understand how new systems can be designed and implemented to best serve local populations while keeping innovation rolling,” says Maurer.  Learn more about where Maurer sees the mobile money industry heading.

For the Haiti research team, the additional funding has allowed them to travel back to the island nation to conduct on the ground research and interviews with people like Jean-Paul who lives in Anse-a-Pitres, an area with no current direct access to banking services.  While only 60 miles of land separates Jean-Paul from Port-au-Prince, the country’s main business hub, the terrain is rugged and often impassable – made even more so by the earthquake – and can take up to 12 hours over the unpaved roads.  Access to mobile banking, says Horst, could mean a safer, more secure and instantaneous way to send and get money where and when it’s needed.

“Mobile banking has the potential to make a significant difference in the ways Haitians move money, set up businesses and combat the cycle of poverty in the country,” she says. The research will begin in tandem with a $10 million incentive campaign launched by the foundation, which aims to spur development of a mobile banking system in Haiti.

For Jean-Paul and the many others in Haiti struggling to rebuild and move forward with limited means, the new access would be positive news.

To hear more about the Haiti research team’s findings and other IMTFI funded projects, join the institute at their annual research conference in September at UCI.

About the Institute for Money, Technology & Financial Inclusion: Established in 2008 within the School of Social Sciences at the University of California, Irvine, IMTFI annually funds researchers who investigate how the world’s poorest people spend, save and store money, and how their habits are or could be affected by emerging technologies that provide greater access to financial services.  Through research, the institute aims to learn how current and potentially new mobile technology services and the security they provide could be made available to millions of poor people around the world. The institute, funded by the Bill & Melinda Gates Foundation, has supported 54 researchers pursuing work in 25 countries as of August 2010.