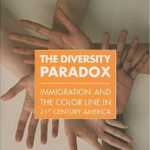 Will today’s Latino and Asian immigrants become incorporated into American society like their European predecessors? Or will race remain a stumbling block to full assimilation? UCI sociologists Jennifer Lee and Frank D. Bean explore these questions in their new book The Diversity Paradox: Immigration and the Color Line in Twenty-First Century America, recently released by the Russell Sage Foundation. They discover that second-generation Asians and Latinos are not as constrained by racial categories as are African-Americans.  A key to the question may lie in the state of intermarriage.

The United States is more racially diverse than ever before. New non-European immigrant groups such as Latinos and Asians made up only 5 and 1 percent of the nation’s population in 1970, but today, they account for 15 and 5 percent, respectively. According to Census projections, by 2050, they will soar to 30 and 9 percent.

Along with the growth in intermarriage is the rise in the number of Americans who chose to identify multiracially. Accounting for just 2.2 percent of the U.S. population in 2008, some analysts project that multiracial Americans will account for 1 in 5 Americans by 2050, and 1 in 3 by 2100. Such trends appear to portend a post-racial society where racial divides are disappearing. However, a closer look at racial group differences tells a bleaker story.

First, U.S.-born Asians and Latinos are marrying outside their race (mostly with whites) at much higher rates than blacks, and these figures have increased since 1990 for both Asians and Latinos. In 2008 nearly three-quarters of marriages involving a native-born Asian was interracial, up from 69.3 percent in 1990. This trend also holds for U.S.-born married Latinos; 52.5 percent of marriages were interracial in 2008, up from 46.0 percent in 1990.

What is especially remarkable about the increase in interracial marriage among Asians and Latinos is that it is occurring despite the growth of these populations due to continued immigration from Asia and Latin America. It’s expected that as Asian and Latino populations grow, these two groups would have a larger pool of partners from which to choose within their racial group, resulting in more intraracial marriage.

Also noteworthy is that the rise in intermarriage is occurring despite the public backlash against immigrants after the September 11th terror attack or the tensions that have led to the new immigration law in Arizona. As strong as anti-immigrant sentiment may appear, any hostile feelings toward the foreign-born are not strong enough to drive down intermarriage rates among native-born Asians and Latinos.

These intermarriage figures reveal much about the state of U.S. racial relations. The fact that interracial marriage continues to increase indicates that racial prejudice is breaking down between Asians and whites, and Latinos and whites -- the social distance is narrowing between these groups.

So while boundaries are rapidly fading for Asians and Latinos, they are not fading for blacks at nearly the same pace, highlighting a diversity paradox. While intermarriage and multiraciality are projected to increase in the foreseeable future, thereby ushering in a new era of diversity, the rates of intermarriage and multiracial identification are occurring at various speeds for different non-white groups. The pace for blacks is the slowest, pointing to a pattern of “black exceptionalism” rather than a post-racial America.