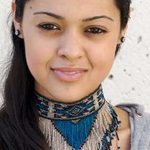 A split-second decision can change the course of your life. Cheyenne Reynoso, third-year sociology major at UC Irvine, knows this firsthand.

As a junior at the Orange County High School of the Arts in Santa Ana, Reynoso was working in the counseling center one day when a secretary asked if she wanted to apply for a college program for Native Americans. One catch: The deadline was the next day.

"I always knew I wanted to go to college, but I never really knew how to get there," says Reynoso, a first-generation university student.

"It was the first time I'd visited a college campus," says Reynoso. "I loved the program. I learned about financial aid, classes, everything."

When she began her higher education at UCI more than a year later, Reynoso jumped in "full force," working to ensure that future generations would find an easier pathway to college and giving back to her community.

"It's not just about you becoming successful," she says. "It's about the people in your life — those who raised you, those who are you."

For the last two years, Reynoso has worked as an AIRP administrative assistant. As a freshman, she became president of the American Indian Student Association, a position she still holds. She represents AISA on the Cross-Cultural Center's Umbrella Council and Southern California universities at the statewide Intertribal Collegiate Alliance. Her numerous scholarships include the inaugural Emory Sekaquaptewa Memorial Scholarship.

Reynoso also organizes the annual AISA powwow, which attracts nearly 3,000 participants and requires five months of intense planning. But the hard work is worth it. "It's so rewarding when you see the final product and the relationships that are built in the community," says Reynoso.

Her work on the powwow hasn't gone unnoticed. This year, during the opening ceremony, she was called into a sacred area reserved for veterans and elders, who wrapped a special shawl around her and sang a song of praise.

"That was a great honor. I can't even describe it," Reynoso says.

Her mother's family is Cherokee, Choctaw and Shawnee; her father's is Aztec and Apache. "Both sides felt discrimination," she says. "We're products of relocation, and many of our records were destroyed. Relatives on my mother's side suffered on the Trail of Tears.

"I'm fascinated with history, especially mine, because of that attraction to the unattainable. I don't really have a complete version of it."

But pieces have fallen into place. In high school, Reynoso began exploring her family tree for a class project and discovered that her great-uncle is Cruz Reynoso, the first Latino state Supreme Court justice.

"Seeing that he was an advocate motivated me before I even knew who he was — like a sixth sense," she says. She tried in vain to contact him. "I'm a firm believer in things happening at the right time," Reynoso says. "So I decided to take a step back and see what happened."

A few years later, at UCI, she received an e-mail from the SAGE Scholars Program, in which she participates, about an upcoming campus event: the screening of a documentary about Cruz Reynoso — featuring an in-person appearance by the man himself.

"When I first read it, I thought, 'This is not a good joke, you guys!'" Reynoso recalls. But it was no joke. She finally got to meet her great-uncle. "He was very, very sweet," she says. And the documentary inspired her: "I didn't know any of it before. I was really proud."

Others feel the same way about her.

"Cheyenne Reynoso is very rare," says Polequaptewa. "She's been instrumental in creating community on campus and beyond. We're very proud of her. She represents American Indians in a positive, respectful manner. She's not afraid to speak out on issues, and she has a strong passion for making big social changes."

Reynoso is driven to give back. "I want to work in my native community," she says. "Youth retention, education, social advocacy, event planning — I love it all."

During the summer, she's interning at Walking Shield, a Native American nonprofit dedicated to improving the quality of life on reservations. "Some people don't have the bare essentials to survive," Reynoso says. "We help with whatever they need: scholarships, roads, homes, baby supplies."

She also organized a weeklong service project for Native American university students to deliver educational materials to impoverished tribal communities in South Dakota. The project was led by UCI and partially funded by AIRP to build connections with Native American youths there.

Reynoso's advice for new Anteaters: Get involved, "even if it's just creating a poster, making a few calls or educating yourself — being open-minded is huge.