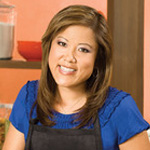 As a member of the UC Irvine billiards team, alumna Doreen Fang often spent up to eight hours a day perfecting her game. Today she shows the same dedication to another passion: food.

Fang, who graduated in 1994 with a bachelor’s in political science, teaches cooking to adults and children, co-owns a Las Vegas-based catering company and blogs about her culinary adventures on Dining with Doreen.

She also appeared on Season 6 of “The Next Food Network Star,” a competitive cooking show co-hosted by celebrity chefs Bobby Flay and Giada De Laurentiis. Her run on the program recently ended, but the Walnut resident doesn’t regret the experience.

After all, how many people can say they’ve had their cooking critiqued by superstar chef Wolfgang Puck, participated in a culinary challenge at the Santa Monica Pier, and thrown out the ceremonial first pitch at a Dodgers game?

“The opportunity to appear on the Food Network was really amazing, and I’m thankful for it,” Fang says. “I’m going to keep putting myself out there, and my goal is to one day have my own cooking show.”

At UCI, Fang’s academic interests wavered between medicine and law, but her personal pursuits remained constant: billiards and cooking. “My memories of Irvine involve spending countless hours practicing with the billiard team at P.V. Cues and making tuna melts and noodle dishes for my friends when we were all starving after a late night,” she says.

Friend and fellow Anteater Kandyce Iwao Watanabe ’95 met Fang as a freshman and was impressed by her work ethic. “Doreen is totally focused,” says Watanabe, a project engineer. “When she sets her mind on something, she’ll put her whole heart into it.”

Watanabe recalls a time when Fang visited her in Hawaii: “Doreen searched all the grocery stores in Oahu for authentic Mexican spices – who knew they existed in Hawaii! She ended up making the most delicious enchilada.”

Another friend and UCI alumna, Karie Yoshioka ’94 – a former point guard on the women’s basketball team who’s now an art director at an ad agency – says Fang is unpretentious about cooking. “Doreen is definitely not a food snob,” she says. “I think of her as this Renaissance woman who can do anything.”

But what Fang chose to do after earning a political science degree at UCI did not thrill her Chinese-born parents: She enrolled in culinary school. “At first it was hard for them, because they didn’t think of being a chef as a normal, professional career,” she says. Fang’s parents ultimately accepted her choice and supported her work, she says.

Fang graduated from the California Culinary Academy in 1997 and launched a catering company with CCA classmate Anna Johnson. Apropos: Opulent Culinary Design handles wedding parties, corporate events and private, sit down dinners in the Las Vegas area. In addition, Fang and Johnson are collaborating on a cookbook and looking into opening an Asian-inspired restaurant in Orange County.

Their catering company also hosts classes for adults and children, whom Fang enjoys exposing to new foods and proper cooking techniques. “We’ve had them prepare everything from dinners with goat cheese and lamb to pizza and burgers,” she says. “At the end of the class, they make their own recipe books.”

She hopes to mold her students into confident cooks who can carry on the tradition of home-cooked meals. Fang has fond memories of cooking with her mother.

“My mom made amazing Chinese comfort food: pot stickers, vegetable stir fry, chicken with Napa cabbage, mushrooms and pickled cucumbers,” she says. “But eventually I taught myself to cook because I got tired of eating Chinese food all the time.”

These days, a typical catered meal consists of filet mignon with a veal stock cabernet reduction and black truffle mashed potatoes. “California cuisine is really my specialty,” Fang says. “I focus on seasonality and freshness and bringing out the flavor of vegetables.”

Despite her recent ouster from “The Next Food Network Star,” she hopes TV will play a part in her future. Fang envisions a show in which she’d travel around the U.S. sampling regional foods and highlighting the best of renowned “foodie” cities like Chicago and Seattle.

“I have a passion for food and the ability to connect with people,” she says. “And appearing on camera just feels fun and natural to me.”