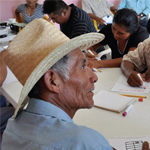 What do an artist, engineer and anthropologist have in common? In terms of new technology, product design and their implementation, says UCI anthropologist Bill Maurer, they share a great deal.

At a June workshop co-hosted by Intel Labs and the Institute for Money, Technology & Financial Inclusion which Maurer directs, participants from professions as varied as linguistics and engineering got together to discuss how their paths cross when dealing with emerging technology.

“Underlying all new technology and product or service development is the meeting of a particular need.  In its design and implementation, that need and the general habits of the people who will wind up using the end product can get forgotten or overlooked,” says Maurer.  “The focus of the workshop was to show that understanding what human beings actually do, rather than what those who design and implement new products and systems think they ought to do, is important.”

In 2008, Maurer created the Institute for Money, Technology & Financial Inclusion to sponsor research on these basic human practices.  The institute focuses specifically on the spending, saving and money storing habits of the world’s poorest populations – those who survive on less than $1 a day.  Their goal: provide information that will help influence and design better and more efficient technologies that give greater access to financial services to those who don’t have it.  Some of these emerging systems include mobile phone-enabled banking where a cell phone text message literally becomes a form of money, and branchless banking via point of sale terminals, operating similarly to Western Union, for those who live in areas where a bank may be more than a day’s drive away.

Research findings, says Maurer, are quickly becoming an important piece in the largely unregulated mobile banking industry’s efforts to develop policy.  In June, he took part in an international conference in Brazil where industry leaders and academics gathered to discuss emerging trends and potential trajectories for the mobile banking industry   The institute’s research on monetary practices and innovation has also attracted the interest of social scientists and designers working in Intel Labs working to identify emerging trends and to bring social insight into the domain of technology strategy and development.  Since the institute’s inception, the two groups have collaborated on a number of interdisciplinary workshops ranging from topics on everyday digital money to shifts in international development regarding the poor in market terms.

In IMTFI’s first year, 17 projects were funded totaling more than $230,000 for research in 14 different countries on topics that ranged from an analysis of rudimentary financial practices in a remote corner of Russia to learning how cell phone-based money transfer systems may impact the poor in Sri Lanka. Their findings have been presented at more than 30 conferences or workshops and resulted in numerous journal articles and one book publication.

The inaugural researchers - who included economists, anthropologists, designers, historians, information scientists and a technology consultant -  participated in the institute’s first major conference in November 2009 where they shared their preliminary findings with scholars, industry professionals and interested members of the community.

Check out full video coverage of the conference online

In 2010, 18 additional projects received funding, bringing the institute’s total number of funded researchers to 51, and countries studied to 24. A conference will be held Sept 29 and 30 at UCI where they will share research findings and project updates.

A call for new proposals for 2011 research funding was made public this week.

“It’s an exciting time for this type of work,” says Maurer who studies the anthropology of money, finance, law and property.  “We’re glad, as an institute, to be at the forefront.”

Photo courtesy of Melissa Cliver, Seattle-based designer and inaugural IMTFI funded researcher who studies methods for creating interactive technology that addresses diverse dialects and varying levels of literacy. Pictured: Researchers meet with coffee bean farmers in Oaxaca, Mexico to discuss concerns, challenges and core needs that must be taken into account when designing new financial and communication tools for the sustainable trade industry.