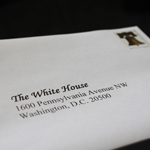 “Responsibly ending the war in Iraq is a major issue and highly important policy decision that needs to be addressed.”

“We need to start raising more awareness about climate change and warning people of the grave we are digging our world deeper into.”

“No conflict anywhere can be resolved if nuclear weapons are involved. The foreign policy most important and in need of your focus right now should be keeping nuclear weapons out of the hands of terrorists.”

“Their assignment was to write a letter advising President Obama to take action and address an issue they found to be important to America’s foreign policy,” says Ellen Schlosser, director of Global Connect.  “We wanted them to understand that while they may not yet be able to vote, they can still have an impact on the country’s future by becoming informed, global citizens.”

For the past nine years, she and a team of UCI students and faculty have been driving that lesson home in classrooms at Newport Mesa and Saddleback School Districts.

Through Global Connect, UCI faculty and students develop global issue-focused lesson plans on topics such as climate change, terrorism, mass media and technology in a global society, AIDS in Africa and the purpose of NGOs  – areas of study in which UCI experts are known internationally for their research, but subjects which are not part of the current California state education standards.  The material is team-taught by UCI students and faculty alongside high school educators in Newport Mesa and Saddleback School Districts.

►Check out video of the program in action

“The primary objective behind Global Connect is to create a university – secondary school bridge to address the international studies gap in California secondary schools,” says Schlosser.

The bridge appears to be working.  On June 4, the program wrapped up another successful year with its annual high school symposium.  In total, more than 350 students from local high schools attended and showcased what they learned through student-designed projects, essays – which included the letter to President Obama – and posters featuring creative solutions to international issues.

►Check out photos of the symposium activities

“Global Connect really changes my high school students,” says Yoleisy Avila, a ninth grade teacher in Laguna Hills High School’s Spanish language immersion program.  “The program takes international topics they’ve heard about and shows them how issues halfway around the world impact their lives here.  One of my ninth graders from this past year summed it up best: ‘I’ll never see the world the same way again.’”

The program was officially launched in 2001 by Schlosser, an advocate and activist for public school education, with the help of social sciences associate dean Caesar Sereseres, vice chancellor for student affairs Manuel Gomez, and a select group of UCI students and faculty.  They started small with once a week presentations in local high schools on global issues relevant in the twenty first century.

Nine years later, the once a week outreach is still going strong at Estancia and Newport Harbor High Schools as well as TeWinkle Middle School.  In 2009, the Global Connect curriculum was expanded into a yearlong university-led core course at Laguna Hills High School.  It was also translated into Spanish for the first time and taught via their language immersion program. El Toro High School may soon be following suit as plans are in the works for offering the course as part of their ninth grade core curriculum.

“The program is proof that innovation in education can be achieved through real, on the ground collaboration,” says Schlosser.  The curriculum is updated annually to account for the continually changing global landscape – a challenge that traditional textbook publishing schedules are unable to keep up with.  At the same time, notes Schlosser, it brings new and updated university research directly to the high school teachers.

In its nine years of existence, she estimates the program has reached more than 7,500 Orange County middle and high school students.  It has also had a significant an impact on the more than 350 UCI undergrad and graduate interns who have helped develop and teach the program materials.  Six former interns have been recipients of Fulbright scholarships and more than two-thirds of the undergrad interns have gone on to pursue graduate school or careers in teaching.  Several are currently participating in the Teach for America program.  Schlosser has also received recognition for her work with the program from both the OC Department of Education and UCI with the 2007 Lauds & Laurels Community Service award.

At the national level, Global Connect was used by California Congresswoman Loretta Sanchez as a program model for the U.S. and World Education Act.  Introduced to the House of Representatives last July, the bill proposes dedicating $200 million in federal money to ramp up international studies education and programs in K-12 classrooms.  In an August visit to UCI, an aide to Congresswoman Sanchez called the program “ideal for improving teacher competency in international studies education.”

As for impacting policy at the international level, Schlosser says, “we’ll see – anything is possible.”  The high schoolers’ letters to President Obama are being mailed next week.