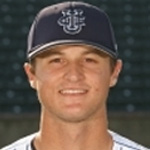 UCI senior baseball player and sociology major Daniel Bibona is one of 10 finalists in the running for this year's NCAA Lowe’s Senior CLASS Award. Fan voting makes up one-third of the selection criteria and supporters have until May 31 to cast their votes.  Votes may be cast each day online or by texting "B1" to 74567.  Bibona is currently in first place with a 1% lead.

Presented each year to the outstanding senior NCAA Division I Student-Athlete of the Year in nine different sports, the award – which stands for Celebrating Loyalty and Achievement for Staying in School – celebrates both the loyalty of seniors who honor a four-year commitment to their university and their achievements during competition and in their community while staying in school.

Bibona, the 2010 Big West Male Scholar-Athlete of the Year, has received numerous honors for his on-field and in-class performance including recognition as the 2009 Big West Pitcher of the Year and selection as a Collegiate Baseball Louisville Slugger first-team All-American. At UCI, he was the 2009 Scholar-Athlete and his junior year 12-1 record put him in a tie for second in the UCI single-season records with a .923 win percentage.

Read more about Bibona’s winning classroom, character, community and competition combo to learn what makes him a true CLASS act, and cast your vote today!