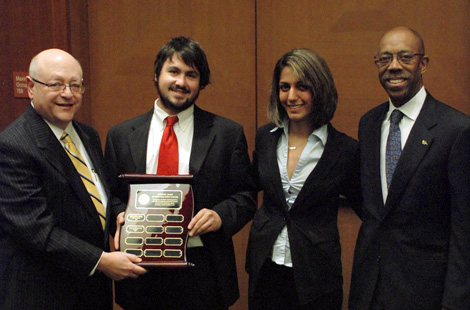 UCI’s Olive Tree Initiative has been named one of two inaugural recipients of the University of California Office of the President Award for Outstanding Leadership.  Designed to honor initiatives that “enhance collaboration between campuses, address issues through system-wide efforts, and further the University’s mission of teaching, research and public service,” the award recognizes the group for its student-led efforts to promote peaceful, open dialogue on the Israel-Palestine conflict.  Student representatives from the group were presented with the award at the May UC Regents meeting in San Francisco.  UCLA’s Improving Dreams, Equality, Access, and Success program also received recognition.

"Both groups are doing extraordinary work on their campuses and in their communities," Mark Yudof, UC president, said in a recent press release announcing the award winners. "Their efforts are in the very best tradition of activism, public service and open dialogue that have always been the hallmarks of the university and its students."

The two groups each received $2,000 to be used to advance the goals of their organizations, and their names will be inscribed on a plaque that will rotate annually to each award winner's campus.

Founded in 2007 by a religiously and ethnically diverse group of students, Olive Tree Initiative ambassadors travel to the Middle East to hear perspectives from Israeli and Palestinian academics, community leaders, and other figures with first-hand knowledge of the conflict. Through their journey, they seek to gain an understanding of the issues beyond the stories found in media.  Upon their return to campus, they participate in open forums to share their findings with the campus and Orange County community.

“The Olive Tree Initiative is a powerful example of experiential learning at its best,” says Paula Garb, director of the Center for Citizen Peacebuilding which has served as a key resource for the group.

In just three short years, the initiative has been wildly successful in its efforts.  More than $140,000 funds have been raised to send two student trips to the Middle East, and a third is in the works for fall 2010.  The program has sparked spin-offs on UC campuses in Santa Barbara and Santa Cruz with additional branches in the works at UC campuses in Berkeley, Los Angeles, Riverside and San Diego.  The initiative served as the foundation of the new UCI undergraduate certificate program in conflict analysis and resolution, and was the inspiration behind a community trip to Israel and Palestine that included Center for Citizen Peacebuilding board members and local Orange County community members - two of whom received UCI Lauds & Laurels Community Leader Awards in part for their work in guiding and assisting the Olive Tree Initiative’s efforts.

Learn more at http://www.olivetreeinitiative.org/.  Join student OTI leaders at Gina's Pizza and Pastaria, located at 4533 Campus Drive in Irvine, on June 3.  A percentage of receipts on all sales taking place from 5:00-10:30 p.m. will be donated to help fund OTI's third student trip to Israel and Palestine since the initiative's founding.  When placing your order, please let Gina’s know you are supporting OTI.