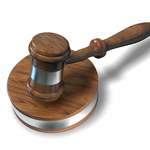 It was a classic case of “who done it?”:  A movie executive for a multimillion-dollar studio is found dead, his two remaining business partners charged with his murder.  The gun is missing and evidence points to both business partners.  The verdict hinges on the lawyers’ expertise as they make their cases through testimony of key witnesses, the likes of which include an old-time gambling buddy, a wayward astronomer, and a used car salesman.

So began the fictitious murder case that served as the focus of this year’s national Mock Trial competitions.  Over the course of 11 tournaments in four states, UCI’s four teams argued the case’s details in 176 trials, and ended their season with 20 team trophies – including one for their fifth place finish at the National Championship tournament – 40 individual trophies, and an overall award for team spirit and civility.

“In the last two mock trial seasons, UC Irvine qualified more teams to nationals than any school in the country,” says head coach Justin Bernstein.  A practicing attorney with O'Melveny & Myers LLP based out of Newport Beach, Bernstein also authored this year’s national case while attending law school at NYU.

The collegiate program works like this:  Teams are formed at the beginning of the season and each member is assigned a role to play in the case.  Using the facts and evidence provided to them in the case file – the same case file which is used throughout the season – the “attorneys” begin putting together their strategies while the “witnesses” begin developing their own colorful characters.  The teams then compete in mock trials against legal teams from other schools at tournaments across the country.

“The difference between an A- and an A+ team is extremely difficult to achieve and takes everyone – witnesses and attorneys – working together in a coordinated effort,” says coach Bernstein.

During the course of a tournament, one team will argue the same case four different times – twice as the prosecution, twice as the defense.  Local attorneys volunteer to preside over the trials and declare the victor after closing arguments have been heard.   The teams put in anywhere from five hours of practice a week at the beginning of the season, to upwards of 30 when gearing up for major competitions.

For UCI, a program which is relatively new to the Mock Trial world, 2010 proved to be another banner year beginning with two Anteater teams tying for first place at the University of Arizona competition, and ending with their fifth place tie at the National Championship Tournament in Memphis.

Like most collegiate activities, friendly inner-state rivalries among top tier universities run deep.  Mock Trial being no different, UCI’s program is quick to point out their more than 30 wins over UCLA, Berkeley and USC this year in addition to scoring victories over six former national champions.

“This season has been a dream come true,” says Marissa Oxman, a senior and dance major who has been involved with the program since its beginning.  “Having been there from our first shot at regionals, to winning our opening round of nationals and now placing in the top ten for the third year in a row, I couldn’t be happier or more proud of what we’ve accomplished.”

This year, Oxman received the American Mock Trial Association’s highest individual honor when she was named an All-American Attorney.  In total, she won seven awards this season, which, when combined with last year’s count, makes her the most award-winning attorney in the country, according to Bernstein.

“Mock trial is an incredibly worthwhile experience.  Not only does it provide experience with law through real courtroom practice, case analysis and legal writing, it’s also an applied exercise in critical thinking, interpersonal, negotiation and compromise skills – all of which are valuable in the real world,” she says.  She’ll soon be putting them to the test as she prepares to begin law school in the fall.

On the witness stand, teammates delivered what Bernstein described as “Oscar-winning performances,” the likes of which contributed to All-American Witness Awards for second year music major Tom Collins, and third year political science major Ana Dixit – her second such award in as many years.

“This year was one of which those who have competed for, coached, and supported the team during its brief existence can all be proud,” says Bernstein.  “We’re celebrating the success – and getting ready to make next year even better.”

Check out photos and full team results on past tournament performances at www.irvinemocktrial.com.  Watch the website for details on the 2010-11 tournament schedule and volunteer opportunities for UCI’s now annual home competition.