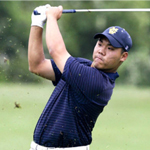 Chin is one of eight members of the American squad that will face eight European players in the annual Ryder Cup-style competition. The 2010 Palmer Cup is set for June 24-26 at Royal Portrush Golf Club in Portrush, Northern Ireland.

"It feels great and actually was one of my goals entering the spring to play well and be selected," Chin said. "To represent the U.S. in anything is a great honor."

The two-time Big West Conference Player of the Year has nine top-10 finishes this season, including three firsts. He has placed in the top four in seven of the last eight tournaments.

"John has played consistently outstanding golf since last October, so I am thrilled that the selection committee has recognized his accomplishments," said UCI head coach Paul Smolinski. "To participate on the Palmer Cup team is a tremendous honor and I know John will represent UC Irvine and Team USA with class."

Chin is the first UCI player to be selected for the Palmer Cup.

Head coach for the U.S. team is Chris Zambri, the head coach at USC.

The all-time Palmer Cup series is tied at 6-6-1. The event is named for golfing great Arnold Palmer.