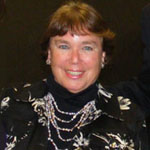 “History and education were the focus of my studies at UCLA. The opportunity to translate these interests into an original program that partnered UCI with local schools was a dream come true for me,” she says.

In March, Schlosser was recognized by the Orange County Department of Education (OCDE) with a 2010 Award for Outstanding Contributions to Education, an honor which follows on the heels of her 2007 UCI Lauds & Laurels Outstanding Community Award.  Both awards recognize her efforts directing UCI’s comprehensive outreach program aimed at improving international studies education in local middle and high school classrooms via university-led instruction and enrichment activities.

Through Global Connect, UCI faculty and students develop global issue-focused lesson plans on topics such as terrorism, gross domestic product, and AIDS in Africa – areas of study in which UCI experts are known internationally for their research, but subject areas which are not part of the current California state education standards.  The material is then team-taught by UCI affiliates alongside educators in Newport Mesa and Saddleback School Districts.

The curriculum program was created in 2001 with the help of social sciences associate dean Caesar Sereseres and vice chancellor for student affairs Manuel Gomez.  It has evolved from a once-a-week presentation based seminar to its current status as a full-fledged yearlong university-led course - UCI’s first to become an established core academic course within California's schools -complete with daily lesson plans and supplemental enrichment activities.

"We don't dumb the material down for the students," says Sereseres who teaches a lesson on the importance of being a global citizen. "These high school students really get an in-depth look at social science topics that are an important factor for understanding globalization and the many issues that go with it that are crucial to the U.S. remaining competitive in our ever shrinking world.”

The curriculum is updated each year by UCI scholars to account for the continually changing global landscape – a challenge that traditional textbooks have been unable to adequately address.

“Global Connect is proof that innovation in education can be achieved through real on-the-ground collaboration,” says Schlosser.

Last year, lesson plans were translated into Spanish and offered for the first time to students in the Saddleback School District’s Two-Way Immersion Program.  The program has also taken to the web, making its very current, global-issue focused materials available to all educators who teach international studies.

“Global Connect is at the forefront of making learning relevant for 21st century learners,” wrote Deborah Granger, OCDE history and science coordinator, in her letter nominating Schlosser for the department’s award.

“Ellen Schlosser has created magnificent bridges and relationships among UCI scholars, students, and middle and high school students across Orange County.  She has been a tireless advocate for the study of globalization, operating an extraordinarily powerful program on a shoestring budget and charming schools into adopting a program with which they subsequently fall in love.”

Schlosser received a commemorative plaque and pin from the Department of Education at a special award ceremony and reception held in her honor March 18.