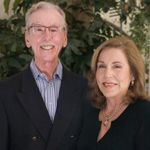 Larry and Dulcie Kugelman, founding board members of the School of Social Sciences’ Center for Citizen Peacebuilding, have a long standing history of developing and promoting international peace building efforts.  From the local Orange County community to conflicted regions in the Middle East, their efforts and programs are helping people with opposing perspectives and viewpoints learn more effective communication strategies in hopes of finding common ground and ultimately, peace.

They are being recognized this year for their efforts with the UCI Alumni Association’s Lauds & Laurels Outstanding Community Members Award.

“The passion Larry and Dulcie have for community service and turning research into action for a safer world is extraordinary,” says Paula Garb, Center for Citizen Peacebuilding director.

When they began working with Garb and the center 10 years ago, the Kugelmans’ knowledge and experience in peace building efforts was impressive, says Garb.  The couple had just returned from Northern Ireland where they both completed master’s degrees in peace and conflict studies at the University of Ulster.  Larry brought with him additional training from the seminary and Peace Corps, Dulcie an undergraduate degree in peace studies from Chapman University.  While in Northern Ireland, they supported and encouraged grassroots peace building groups.  One such group, Seeds of Hope, did breakthrough work in facilitating reconciliation between former combatants and victims’ families.

Through their partnership with UCI, the Kugelmans have become a foundational pillar of support in the Center for Citizen Peacebuilding.  They have played a pivotal role in the student-led Olive Tree Initiative, providing funding and encouragement for students seeking to establish an open forum for discussing cultural and religious differences surrounding the Israel-Palestine conflict.

“OTI has played a major part in bringing more dialogue on the Israeli-Palestinian conflict to campus, and Larry and Dulcie have been at the heart of this program with their continuous support, perseverance and leadership,” says Daniel Wehrenfennig, political science Ph.D. alumnus and director of the Olive Tree Initiative.

Their support has helped two different groups of students visit the region since the program began in 2007.  This year, the couple posed a challenge to the third student group planning to make the trip: raise the first $20,000 of the needed $70,0000 by December 2009, and they would personally match the gift.  The students did, and now with nine months to go, are more than halfway to their fundraising goal.

“You think you can understand a conflict from a distance, but in reality, you need to spend time talking with people from all the different perspectives in order to really understand it,” Dulcie says.  “The Israel-Palestine issue is extraordinarily complex – being able to travel there gives the students a much larger and deeper understanding, and we are happy to be able to support their efforts.”

The students’ passion for gaining insight on the conflicted region inspired the couple to develop a similarly focused community initiative, and in March, Larry and Dulcie will be part of a 12 person contingent traveling to Israel and Palestine to gain first hand knowledge of the area and its challenges.

The couple has also helped develop and support other innovative peace building projects including Picturing Peace and Cirque de O.C. Administered by the UCI School of the Arts and the University of Ulster, Northern Ireland, Picturing Peace taught Protestant and Catholic elementary and middle school children how to communicate their feelings, values and understanding of peace through photography.  A joint exhibit at the Belfast City Hall brought these children together for the first time, even though their schools were only 200 yards apart. The Cirque de O.C. program brought children who were affected by the Northern Ireland violence to Orange County where they stayed with host families and learned esteem building techniques through the fun and creative outlet of performance art.

“Programs like these allow us to put innovative research on peace building efforts into action,” Dulcie says.

To this end, the couple continually funds graduate and faculty research through the Center for Citizen Peacebuilding.

Their work has been widely recognized in the community.  Dulcie received the Interfaith Peace Ministry of Orange County’s Paul Delp Peace Award, and Larry, who also serves on the board of Share Our Selves, has received several awards as well as recognition by the Orange County Human Relations Commission with the 2009 Community Leader Award.

“Their tireless efforts on behalf of peace not only at the university but in the world around us truly exemplify the spirit of outstanding community service,” says David Rosten, UCI political science alumnus and fellow Center for Citizen Peacebuilding board member.

Join the School of Social Sciences and UC Irvine in celebrating the Kugelmans’ Outstanding Community Service honor at the 2010 UCI Alumni Association Lauds and Laurels Banquet Thursday, May 13 at the Fairmont Newport Beach.  Further banquet details are available online at http://www.alumni.uci.edu/how_to_get_involved/lauds_and_laurels.html.