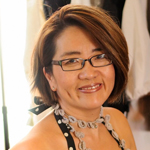 Jenny Doh, political science class of ‘91, may have spent her early years in Seoul, Korea, but she was born at UC Irvine.

“I see the university as something I cannot and will not ever abandon,” said Doh. “It is my family, it is where I was really born.”

She came to campus in 1986 as a new freshman straight from Bakersfield, Calif. where her family had settled after immigrating some 10 years earlier.  By her own account, she simply fell in love with the campus.

“I loved everything about it, even the design. It’s a circle, you can never get lost.”

From those first few days on campus, Doh managed to never lose her way and, in many respects, has come full circle. This year, she has been selected as the association’s Lauds and Laurels Distinguished Alumna in Social Sciences.

“I have a sense of obligation as an alumna to make sure that I continue to support the institution that helped shaped me. It is with extreme pride that I can attach my name to UCI, to be associated with such a strong university,” she says.

While a student, Doh was actively involved in a number of organizations including service as a peer ombudsman, founding president of the Movement of University Students for Effective Lobbying, commissioner for the Associated Students of UCI, political branch director for the Asian Pacific Student & Staff Association and treasurer of the Korean American Student Association.

She earned the honor of serving as UC Irvine’s first student regent, representing the student body within the University of California Board of Regents and the UC Office of the President. It was during that time that she was taken under the wing of some of her most influential mentors - alumna Martha Newkirk, Chancellor Emeritus Jack Peltason and his wife Susie.

“It is because of each of them that I understand my responsibility to the university,” Doh says.

In July 2007, she took over as president of the UCI Alumni Association, the university’s largest volunteer organization. More than 117,000-strong, the alumni family is one to which Doh is unquestionably committed.

“In my four years of serving on the board of directors for the UCI Alumni Association, I have yet to meet anyone more passionate about UCI than Jenny,” says fellow board member Johanna Wilson’98.

As president, she sought to ensure the alumni voice was heard and did so by strengthening the relationship between the association and the campus's other volunteer organizations: Chief Executive Roundtable, the Foundation and the Chancellor’s Club.

She also worked to engage fellow alumni in university service, the likes of which included Santa Ana Zoo director Kent Yamaguchi ’83 and ’84, who Doh recruited as the association’s vice president of membership, a position he still holds.  Together, with California assemblyman and fellow UCI alumnus Jose Solorio’92, they got the ball rolling to bring to the Santa Ana Zoo a real-life Mr. and Mrs. Peter Anteater.

“Her commitment to this project included hours of fundraising and event planning and execution in order to see to fruition the exhibit which will showcase the UCI mascot,” says Solorio.  “Her hard work has paid off as two giant anteaters have arrived at the zoo and will soon be introduced to the Orange County community.”

Professionally, Doh recently launched her own business, CRESCENDOh, LLC.  The online media center features art from a variety of artists and genres, a venture that allows her to couple her own creative interests and experience in the publishing world, six years of which were spent as editor in chief of Stampington & Company.  She was recently recognized for her efforts by the Life Through Art Foundation at its 5th Annual Red Party in Los Angeles.

“Jenny is, without a doubt, one of UCI’s most successful alumni, not only because she has continued to serve the campus, both directly and indirectly, but because she so passionately and conscientiously serves the needs and interests of the broader community,” says Manuel Gomez, vice chancellor of student affairs.

Join the School of Social Sciences and UC Irvine in celebrating the Doh's Distinguished Alumna honor at the 2010 UCI Alumni Association Lauds and Laurels Banquet Thursday, May 13 at the Fairmont Newport Beach.  Further banquet details are available online at http://www.alumni.uci.edu/how_to_get_involved/lauds_and_laurels.html.