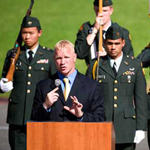 David Curry, a U.S. Marine with two tours of duty in Iraq behind him, knows what it’s like to be recruited to a cause and see it through with pride. Now the 28-year-old UC Irvine sociology/economics major has turned recruiter – not for the military but for veterans’ education.

With impetus from the Post-9/11 GI Bill that took effect in August and outreach efforts by UCI’s Veterans Student Union, Curry expects the campus’s student-veteran population to mushroom to 400 from the current 60 by fall 2014. Already, UCI is beating projections with a 33 percent increase in student veterans this fall over 2008.

“We want to target those who have served the country and now, with higher education, can become part of the fabric of the future and continue to serve,” says Curry, vice president of VSU. “Through education, we want to see veterans better represented in national and state legislatures, in making policy – having a larger stake in our country’s future. In turn, they will bring a diversity of experience to the campus.”

Curry emceed UCI’s first veterans appreciation ceremony Tuesday, Nov. 10, set against half-staff flags honoring Fort Hood casualties. Ivan Waggoner, a VSU member and Army Reserve sergeant who served in Iraq from May 2005 to June 2006, spoke about what it means to be a veteran.

“I was always a goal-driven kid,” he said, “but I lacked self-confidence. Then I shipped out to Iraq and learned that if I could do well there, I could do well in anything.” The political science major hopes to go to law school and eventually work for the Department of Defense.

Student veterans in the crowd clearly identified with Waggoner, nodding at his insights and applauding his goals. Veterans recognize each other on campus, sometimes just by the way they walk or carry their backpacks. Increasing their ranks and ensuring their success here, however, will take dedicated outreach and increased campus services, Curry says.

“Most student veterans are first-generation college students, and nearly 50 percent are minorities,” he says. “Socioeconomically, they are either inner-city working class or rural middle class. They don’t have the culture of higher education in their families.”

As in much of what these veterans have done, failure is not an option. If post-9/11 veterans are to have a voice in the future, Curry says, they must be successfully recruited and nurtured on campus.

The VSU motto, based on a quote from Greek historian Thucydides, says it all, according to Curry: “The nation that makes a great distinction between its scholars and its warriors will have its thinking done by cowards and its fighting done by fools.”