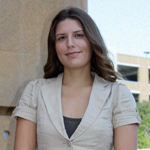 For UCI graduate student Ana Pesic, growing up in Serbia during the 90s - a time of considerable political, social and economic change in the country’s history - played a major role in her decision to study economics.

“I was really frustrated with how inefficiently the economy was functioning,” she says, explaining that hyperinflation and constant power outages made life in the struggling region difficult.

“I remember having to wait two hours in line for a loaf of bread and a liter of milk and many times you would come away empty handed.  To me, it made no sense because we lived in a territory with maybe the most fertile land in Europe, yet we were unable to produce enough wheat and other agricultural product to satisfy the demand.”

When her father’s job was transferred to the United States, she took the opportunity to pursue her interest in how economies work as an undergraduate at UC Berkeley where she studied factors impacting the elasticity of demand for gasoline.

Now in her fourth year as a graduate student in UC Irvine’s economics department, she is focusing her efforts on the economics of industrial organization.  Specifically, she is studying how joint research ventures in advanced technological industries affect organizational research and development costs.  She has two working papers out on the topic and a third on how switching costs affect firms’ decisions to enter the mortgage industry.

“Ana has been working to understand when and why firms collaborate in conducting research, generating innovations, and adopting new technology,” says Linda Cohen, economics professor, social science associate dean of graduate studies, and one of Pesic’s three advisors at UCI. “Bringing to bear on the problem both theoretical and empirical tools, her findings will shed light on how information flows and restrictions can aid or hinder collaboration.”

Since arriving on campus in 2006, Pesic’s research has been funded through a Social Sciences Merit Fellowship.  In September, she was awarded the 2009 Sheen T. Kassouf Fellowship, named in honor of professor Sheen Kassouf, a pioneer of modern finance and a highly respected UC Irvine economics scholar and academician.  The $10,000 award recognizes economics graduate students who demonstrate excellence in coursework and research. Pesic is the fourth graduate student to receive the award since it’s founding in 2006.