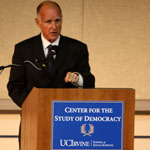 Jerry Brown was the state’s youngest governor in 110 years when he took office. If he wins the job again, he would be the oldest governor in California history. Brown, 71, the current state attorney general, spoke Thursday at UC Irvine about education, the criminal justice system and the need for additional water infrastructure statewide. A mixed crowd of hundreds of Brown supporters and UCI students lined up as much as an hour early for the chance to see the man critics call Moonbeam.
Brown is expected to announce a gubernatorial bid soon. He was 35 when he was elected governor of California in 1974. Brown was this year’s Peltason speaker, for an annual talk given by the Center for the Study of Democracy. Previous speakers have included Sen. Ted Kennedy and former Mexican President Vicente Fox.

Pictures from the lecture are available online at http://picasaweb.google.com/UCISocSci/CSDJerryBrownLecture2009?authkey=G... Courtesy of Luis Fonseca, School of Social Sciences.