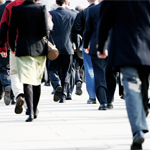 
Compromise, while considered a key ingredient for a healthy long-lasting relationship, doesn't always amount to an equitable 50/50 split. Such is the case, finds assistant professor Joy Pixley, when it comes to career prioritization decisions for dual-earning couples. Based on an analysis of 73 career decisions made by 37 couples, she finds that decisions to place a priority on the career of the husband more negatively impacts the wife's career advancement opportunities and potential wage earnings than if the situation were reversed.

Her findings will be one of many topics of discussion at this year's American Sociological Association annual meeting which will be held August 8-11 in San Francisco. The event, which draws more than 6,000 participants, will have excellent representation from U.S. News and World Report's 27th best ranked sociology department as 75 UCI sociology faculty and graduate students have plans to attend.

"UC Irvine sociologists, faculty and graduate students together, are among the most active and visible in the country in producing policy relevant new research and in serving the nation's premier professional association," says Wang Feng, sociology professor and department chair. This year's meeting, themed around the changing definition of communities, ties closely with the major research areas of the department, he adds.

Here, we offer a sneak peak at some of the research findings being presented by UCI sociologists.

Social Inequality
Compromise, while considered a key ingredient for a healthy long-lasting relationship, doesn't always amount to an equitable 50/50 split. Such is the case, finds assistant professor Joy Pixley, when it comes to career prioritization decisions for dual-earning couples. Her research pulls into the social inequality debate issues of gender and life-course planning. Based on an analysis of 73 career decisions made by 37 couples, she finds that decisions to place a priority on the career of the husband more negatively impacts the wife's career advancement opportunities and potential wage earnings than if the situation were reversed. Her findings will be the topic of discussion at a session on gender at the interface of home and work at the up-coming August meeting.

Using his research in Brazil as a case study, Stanley Bailey, associate professor, will share his findings on how the definition of race and inequality differs from country to country. According to his research, Brazilians - in contrast to Americans - avoid rigid notions of racial group membership. Roughly 40 percent of Brazil's population self-classifies as coming from mixed ancestry, Bailey says. Yet the Brazilian black movement endorses a black vs. white scheme for classifying the population where those of mixed ancestry become black. He will demonstrate how adopting this vision might impact studies of racial inequality when experiences of discrimination don't fit neatly within the same black and white scale. His findings are the subject of his recently published book, Legacies of Race: Identities, Attitudes, and Politics in Brazil.

Social Movements and Social Change
How groups mobilize to incite change pervades all aspects of society, be it politics, business, education or religion. Paul Morgan, graduate student, links the 21st century with historical research on social movements to explain how an online group's protest efforts against Scientology were able to quickly launch from the virtual world to reality, resulting in physical protests at more than 100 sites. His findings could serve as a working model for similar online movements interested in branching out from clicks to bricks.

The role of higher education in sparking social change is the research focus of Evan Schofer, associate professor. The worldwide expansion of higher education has tremendous transformative potential, constructing individuals with common global identities and frames and linking them to each other, he says. At this year's annual conference, he will present findings that link higher education to increased rates of citizen participation in global and national civil society.

Complex Networks
Between cell phones, email, online social networks and the myriad technological tools available at our fingertips for communicating with one another, staying connected with friends, family and co-workers has never been easier. How we form these connections and the way in which we share information is the research focus of Carter Butts, associate professor. He has applied computational models of complex networks to studying everything from Facebook networks to how emergency personnel communicate during times of crisis. At ASA's up-coming meeting, he will present research that uses similar modeling to explain how upper-level managers within the high tech industry communicate with one another and seek advice. His findings could help organizations discover better methods for internal communication.

Taking a slightly different approach to the concept of complex networks is Vincent Laus, sociology graduate student. His research highlights how a person's personal networks may facilitate drug use. Based on in-depth interviews with 14 northern California Filipino American drug users, he found that only by breaking free from their social networks could they kick their addictions while those who maintained ties remained users.

Race and Immigration
Increasing rates of immigration across multiple continents have spurred massive demographic changes across the world. In many instances, color lines have blurred and cultures have converged. A study by UC Irvine sociologists Cynthia Feliciano and Belinda Robnett, however, says that the cross-cultural revolution does not extend to the internet dating scene, where people often follow racial stereotypes when looking for love. Their findings showed that Asians, African Americans and Latinos are more likely to include whites as possible dates than whites are to include them. The study appeared in the March issue of Social Science Research and will be the subject of their presentation in San Francisco this August.

Jennifer Lee, associate professor, will share her findings on the divergent routes the adult children of immigrants take to educational and occupational attainment. Based on 160 in-depth interviews with 1.5 and second-generation Chinese, Vietnamese, and Mexicans, she found that while some follow the normative course and achieve predictable levels of attainment, others take alternative pathways that defy convention yet achieve success nevertheless. Still others, she says, find their routes to upward mobility hampered or blocked altogether. Her findings identify key mechanisms that affect choices made in pursuit of success, the results of which help dispel some of the enduring myths about group-based cultures, stereotypes, and processes of assimilation.