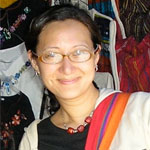 Around the world, hundreds of organizations are involved each day in on-going efforts to treat, prevent and ultimately eradicate HIV/AIDS. Elsa Fan, UCI anthropology graduate student and former United Nations Development Program (UNDP) worker, says that amidst these efforts, there may be conditions undermining crucial global health efforts.

"In China, HIV/AIDS has become, for many groups, a mode of survival," she says. "For those infected, for example, access to antiretroviral medication also grants access to additional social welfare benefits such as subsidized healthcare and living stipends."

With a newly awarded $3,000 UC Pacific Rim mini-grant fellowship, she will travel to China to study how such factors may be affecting prevention efforts and what different groups are doing to stem the spread of the epidemic. Through her fieldwork, she aims to learn the stakes at hand for different groups and their perspectives on the competing goals of HIV/AIDS prevention and the tensions it creates.

Fan, an alumnus of both UC Berkeley and the London School of Economics, spent eight years working in the non-profit/non-governmental sector before coming to UCI in pursuit of her Ph.D. During that time, she worked extensively in Asia implementing social development projects, including those aimed at HIV/AIDS prevention.

"When I began working for UNDP China in the early millennium, AIDS was just beginning to emerge as a concern for the country so it was still relatively obscure," she says.

According to the latest World Health Organization and UNAIDS statistics, there are now approximately 33 million people living with the virus, 700,000 in China alone.

"Over the years, the epidemic has developed in very interesting ways, both politically and socially. Given the complexity of HIV/AIDS, it is not just a biological disease, it is also a social one. Understanding this and how key players perceive their roles becomes important when thinking about how to address it."

UC Pacific Rim funding for her study will run through January 2010 and findings will contribute to her on-going graduate research. Additional support has been provided by the Center for Asian Studies, the Public Impact Fellowship, and the UCI anthropology department.