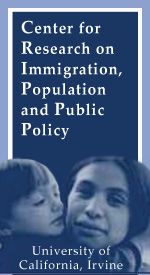 How immigrants join and become part of the societies to which they migrate is one of the most critical issues facing the post industrial world, says Frank D. Bean, director of UCI's Center for Research on Immigration, Population and Public Policy. "In the United States, demographic and economic changes such as the aging population, lower fertility, an expanding economy, more women working, and higher fractions of the population going to college have caused the United States to rely on immigration to supplement growth in its workforce," he says. "The issue is not just U.S. specific; societies around the world rely on immigrants in the work force in order to function. California is one of - if not the main - immigration state in the United States, so the issue is extremely critical here." The sociology chancellor's professor is an expert on the topic and in 2001, he helped found the Center for Research on Immigration, Population and Public Policy to foster further multidisciplinary research on immigrant incorporation. In May, UCI's Office of Research officially designated the center a campus-wide organized research unit (ORU). The status, explains the Office of Research, gives the center UC system-wide recognition for a research topic which complements the goals of the university. It brings the total ORU count on campus to 20 and marks the third to come out of the School of Social Sciences. The center is the second UC system-wide ORU established to study the impact of immigration on societies, joining UCSD's Center for Comparative Immigration Studies. The 37 faculty who make up the center's core investigate this issue from a multidisciplinary angle in order to impact and change immigration policy on a national level. Some of their currently funded projects include identifying how immigrants and children of immigrants define and measure success; how multigenerational families of immigrants become socioculturally, economically, geographically and politically integrated; and how new measurement methods may be developed to more accurately pinpoint the size of the immigrant population living in the U.S. "No state would appear to benefit more from policy-relevant immigration research than California," says Bean. "Understanding the implications of immigration for California, for its demography, economy, and health-care, social service, education and political systems is central to planning and policy formulation processes at the state, county and city levels." Learn more about Center for Research on Immigration, Population and Public Policy current projects and published studies online.