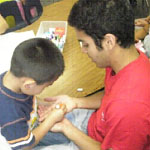 In June, UCI undergraduate Emilio Rodriguez will get into character as high school student Emilio Rodriguez seeking advice on dealing with his sister's drug addiction in the School of the Arts' performance of "Dear Gabby."

Off-stage, the real life Rodriguez, an out-going comparative literature and drama major, puts his energy and creative spirit into helping lead the School of Social Sciences' chapter of Jumpstart. He is one of the outreach program's 95 UCI students who work one-on-one with pre-school students in the local community. Through weekly study and educationally-themed play sessions, they seek to improve language, literacy and social skills for pre-school students in low-income communities.

This year, the national Jumpstart organization has selected Emilio as one of five volunteers from its 4,000 member corps for the Spirit of Service award. The honor, co-sponsored by the American Eagle Foundation, recognizes those who have "gone above and beyond the Jumpstart mission and truly made a lasting and profound impact in their community," a difference Emilio has been involved in making since starting with Jumpstart two years ago.

"I really like getting to work out in the community with underprivileged children who, as they grow older, a lot of times feel they don't have the educational resources to go on to higher education," he says. "I like being part of their start at a young age where they absorb information the most. By giving them extra help in school, we're building their love for learning at an early age which directly has an affect on their decision to go on to college, and that's very rewarding."

The experience for Emilio has also impacted his studies at UCI when, last year, he was paired with Octavio, a then 4-year-old at Pomona Preschool in Costa Mesa.

"When Octavio didn't seem very interested in our one-on-one reading time activities, I had to get creative," he says. He decided he'd have to get into character and act out some of the stories. His reading buddy got more excited about the books and reading in general, and Emilio found an unexpected interest in acting, leading him to take a double major in drama.

Emilio's creative enthusiasm and passion impacts everyone, from the pre-school students he's helping to learn to read to his university peers who he helps direct as a Jumpstart team leader, says Jessica Oh, one of the program's supervisors.

"Over the past two years, Emilio has played many parts in Jumpstart, serving as a volunteer coordinator, one-on-one student mentor and now as a team leader. Whenever there is a challenge, he is willing to stand up and meet it," she says, adding that he often makes extra visits to the pre-schools under his charge in order to gain more experience and to get to know each of the children participating in the program.

"I can always count on Emilio to energize our students. He truly leads by example."

The Spirit of Service award, which carries a $5,000 prize, will help Emilio pay for tuition next year as he continues to be involved in Jumpstart and on campus through his work as a residence hall advisor, campus tour guide, visitor center employee and freshman orientation volunteer.