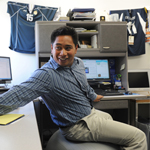 Robert Espero, UCI political science alumnus and technology coordinator of Disability Services Center, spends most of his time working on technology and the rest training students.

Once an Anteater volleyball player, Robert Espero now bounces among computers at UC Irvine's Disability Services Center on a large, inflated exercise ball he uses as a chair.

"Look what this program can do," the technology coordinator says, skidding up to a laptop. Espero puts on headphones, tells the computer to wake up and is soon surfing the Internet and creating a Word document - not only typing but editing and inserting images - all with vocal commands and a program called Dragon Naturally Speaking.

"It allows for complete hands-free computer use," he declares.

If Espero is practically bursting with enthusiasm for his latest toy, it's because he knows this kind of cutting-edge adaptive technology is the key to academic success for many at UCI. The center serves about 500 students with orthopedic, visual, hearing, learning, chronic health, psychological and other disabilities.

"We're giving them the tools to reach their potential," Espero says. "Adaptive technology includes any hardware or software that gives people with disabilities access to computers."

Since joining the center in 1998, Espero has seen such technology become increasingly sophisticated.

"We used to hire people to read and record textbooks for students who are blind or have learning or other disabilities," he says. "Now we can scan their books, and students can listen to them on their MP3 players or laptops."

Kurzweil 3000, the center's most popular program, can read print or Web text aloud and speaks each letter or word as students type, alerting them to spelling errors. The voice sounds natural, not like a robot, Espero says. Students can also highlight passages, pin notes to pages and get word definitions with the software.

"They're blown away by all it can do," he says. "Students with dyslexia use it to spell out words."

Espero, who got his bachelor's in political science from UCI in 1992, tried law school before deciding he preferred tinkering with computers. He spends 90 percent of his time at the center working on technology and the rest training students.

"Robert has truly helped me at UCI," says third-year sociology major Stephen Marley, who has attention-deficit /hyperactivity disorder. "Whether it's fixing my computer, installing technology so I can keep up with a class or making a joke when he sees I'm having a hard day, he continuously makes my UCI experience memorable and fun."
Espero also keeps in touch with alumni assisted by the center. He's especially proud of those who have gone on to graduate school and rewarding careers.

"Success stories drive everyone in our office. We're giving students with disabilities the opportunity to succeed," he says. "We're leveling the playing field."