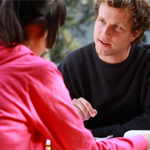 Loop, swoop and pull. Eight times eight fell on the floor, came back up and it was 64. As children, we have to be taught how to do most things, like how to tie our shoes or solve a math problem, oftentimes using rhymes and tricks in order to remember the process or answer. The ability to understand language - the very words and the way they're put together to form these helpful hints - is a different story.

"Language is this incredibly complex process that just happens. Unlike math where we have to think first in order to solve a problem, with language, we're able to understand it as quickly as it's spoken," says Jon Sprouse, cognitive sciences assistant professor. He and fellow assistant professor Lisa Pearl have received a $176,000 grant from the National Science Foundation to study how this happens.

"The mind may be hardwired to pick up language more quickly than other skills," says Pearl, explaining what is known as the universal grammar hypothesis. "Because of the structure of the mind, language may follow a specific pattern and so there are certain things you wouldn't have to learn because the mind just gives them for free."

For example, says Sprouse, children aren't necessarily taught what constitutes "bad" sentence structure, yet they learn what is correct based on what adults do say.

"If we encounter these 'bad' structures too infrequently to learn them in the normal way, and yet we still manage to learn them, this suggests that something in our minds enables us to automatically understand them," says Pearl.

They plan to test this hypothesis by evaluating the different structures in language that children must learn and that adults know, but don't encounter very much as children. Their findings will help researchers learn whether humans are hardwired to pick up language specifically, or if language learning ability is just one demonstration of human ability to learn things in general very quickly.

Their study began in March and will run through March 2012.