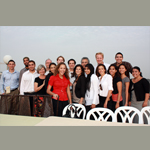 For 38 years, the commission has recognized individuals, law enforcement agencies, schools and community organizations for their contributions to human relations in Orange County. Olive Tree Initiative, a diverse group of UCI students who traveled to the Middle East in September and brought back to the campus community newfound insights about the conflicts, will receive a Community Leader Award. Also receiving a Community Leader Award will be Larry Kugelman, founding board member of the UCI Center for Citizen Peacebuilding.

"On our 38th anniversary, OC Human Relations is pleased to salute the outstanding community leaders who dedicate themselves to honoring the richness of Orange County's diversity," says Judy Iannaccone, president of OC Human Relations. "These are truly Orange County's unsung heroes, who invest so generously of their time and talent to make the county a better place for all people to live, work and do business. It's a privilege to spotlight their accomplishments."

OTI was formed in 2007 when UCI student leaders from Muslim, Jewish, Christian, Druze and unaffiliated backgrounds set a goal to better understand the ongoing conflicts in Israel and Palestine. The students raised more than $60,000 from Orange County organizations and individuals to fund the Middle Eastern tour.

The group, which includes members of Anteaters for Israel, the Muslim Student Union, Hillel, the Society of Arab Students, the Middle East Studies Student Initiative and the Model U.N., met weekly for more than a year, educating themselves on the region's history and recent developments. They addressed cultural and religious differences and established protocols for interaction among themselves and with the often-controversial speakers they sought out.

On Sept. 1, 2008, 14 students and three advisers left Orange County for Israel and Palestine. Fourteen days later, they returned with an increased awareness and deeper understanding of the highly volatile geopolitical situation and the importance of peace.

Since then, the group has hosted forums on campus and around the county for students and community groups. OTI this month is publishing a journal commemorating the trip, and a summit is planned for April 24-26 to share the successful project model with other UC student leaders.

Chancellor Michael V. Drake, M.D., will co-host Awards 38, along with Sandra Hutchens, Orange County sheriff-coroner. The event will be held 5:45-9 p.m. at the Grove of Anaheim, 2200 E. Katella Ave. Individual, table or sponsor-level tickets can be purchased from the Orange County Human Relations Commission, www.ochumanrelations.org.