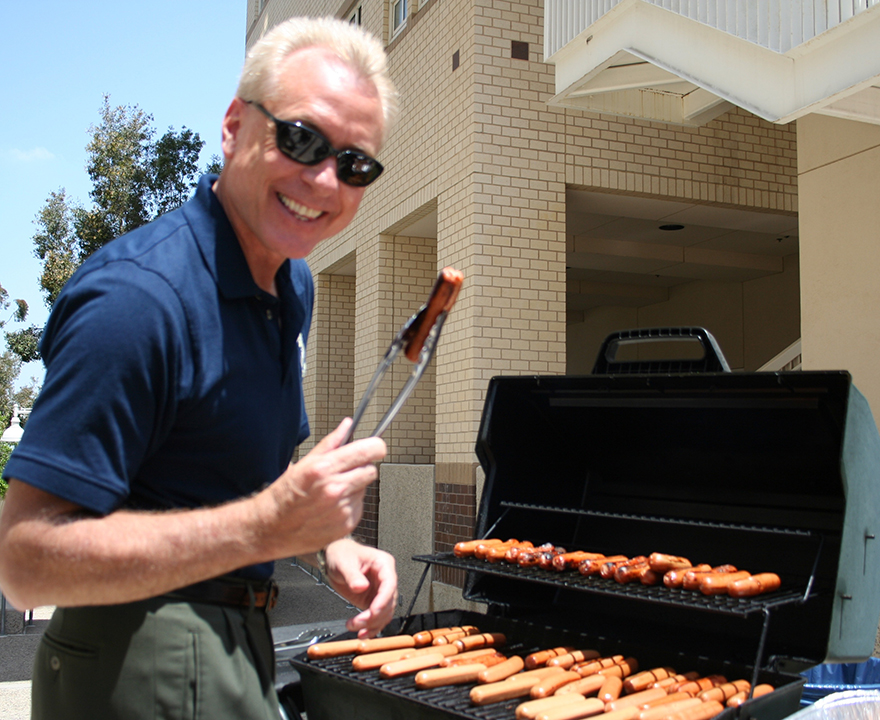 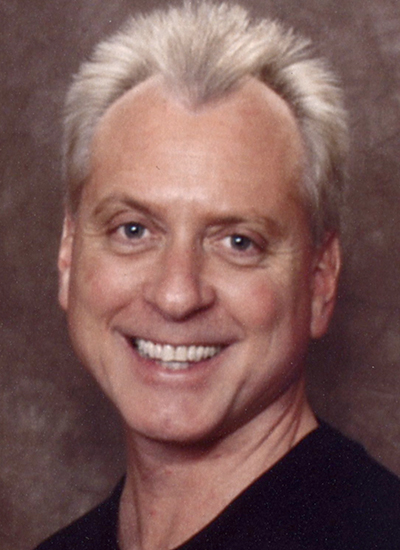 In every organization, there are those go-to people who, day in and day out, can be counted on to make sure things run smoothly. For the past 25 years, working across multiple units on UCI's campus, Dave Leinen has been "that guy." Whether it's making tough decisions in order to effectively manage the School of Social Sciences' budget and staff - a job he has consistently done for the past 10 years as assistant dean of the largest academic unit on campus - to serving up hot dogs and hamburgers to hundreds of incoming freshmen, Leinen can always be counted on to be there with, according to Michael Poston, UCI's director of institutional research, "a smile on his face and a cheerful word for everyone."

This year, the Alumni Association is recognizing Leinen's efforts out of UCI's 9,200 person staff by awarding him the 2009 Lauds & Laurels Staff Achievement Award.

"Dave Leinen is someone who makes us all proud to be Anteaters and it is a source of pride to see him win this award," says Ralph Cicerone, National Academy of Sciences president and UCI chancellor emeritus.

"Dave has been key to the success of social sciences and to creating a first-rate environment for staff and faculty, with a focus on excellence and on strong community values," says Barbara Dosher, School of Social Sciences dean. "He has also contributed generously in many ways to many programs across the campus."

When Leinen began his career at UC Irvine in 1984, it was "intended to be temporary," he says with a laugh. The Iowan native was coming off a successful college baseball career as a pitcher and a two-year run in professional baseball. He headed West with plans to become an Orange County firefighter, leaving the Midwestern plains, but not the hardworking down to earth mind-set he developed from summers spent working on his grandparents' farm.

In a show of humor for which Leinen is so widely known across campus, he notes that while his career path may have deviated just slightly following his hire into UCI's accounting office rather than the fire department, he's still found a way to put his original interest to use.

"I love the people aspect of my job, finding ways to bring everyone together to solve problems, and sometimes that involves putting out fires," he says, adding, "although, if not careful, one can create some fairly serious water damage trying to extinguish a small fire."

It is this same skill and unassuming humor that many of those with whom Leinen has worked over the last quarter century count as hallmark to his success as an administrator.

"One of Dave's key skills and talents is his ability to meet people halfway as he works to resolve problems," says Bill Maurer, anthropology department chair in social sciences where Leinen is currently assistant dean. "His guidance and leadership is done with equal measure professionalism and personality, and I have greatly appreciated his calm voice and steady hand during times of crises."

William R. Schonfeld, political science professor and former social sciences dean who initially hired Leinen into to his current post back in 1999 agrees: "While Leinen is a man who compromises with others to arrive at appropriate decisions, he is a man who never compromises his integrity or standards."

Leinen attributes his work ethic and seemingly innate ability to balance the many interests of everyone with whom he interacts to his Midwestern roots. "I learned growing up by watching my parents and grandparents who taught me that you lead by example and you never ask someone to do something you yourself wouldn't do."

His easy going, yet professional demeanor and ability to stay cool in the face of multi-faceted challenges has served him well as he has climbed the staff ranks at UCI to supervisory and management positions in the health sciences' Department of Pharmacology and later in the School of Physical Sciences. His role as pharmacology's management services officer helped him begin to develop the budget management and staff supervisory skills he continued honing as the contracts and grants manager and later as the business and finance manager of physical sciences where he oversaw a $33 million dollar budget and the programs it supported.

Harold Moore, physical sciences dean during Leinen's tenure there, recalls his skills in business, finance and administration as "exceptional." He goes on to note, though, that it was his unique ability to "establish long-standing friendships" amidst the tense situations his job sometimes required as what set Leinen apart. "Dave was often the first person contacted when problems surfaced in departments, and even though his job description did not require him to be our ombudsman, he often functioned as such, solving problems before they escalated."

Cindy Sasso, social sciences personnel manager who has worked with Leinen for the past 10 years, concurs adding, "I would not be surprised to find his number on speed dial from major units on campus - he's always been the 'go to guy.'"

In 1999, Leinen moved from physical to social sciences where he has been for the past 10 years, aside from a yearlong stretch in 2004-05 when he served as UCI's associate director of athletics, a move he says that brought him back to his love of sports. While only there for a year, UCI men's volleyball head coach John Speraw - who was last year's co-recipient of the Lauds and Laurels Staff Achievement Award - notes Leinen's characteristics of "credibility and trust" as tremendous assets, along with his ability to impact morale, for making the department a positive and fun place to be.

He returned back to his post as assistant dean of social sciences in mid 2005 where he continues to oversee the largest academic unit on campus with a 90 person staff, 148 faculty members, undergraduate and graduate enrollments of more than 6,500 students, and a multimillion dollar budget.

"The School of Social Sciences is a fun and interesting place for staff to contribute. In reality, the day-to-day environment is much like an ongoing human subjects experiment - if you watch what's happening and pay attention, you'll not only be amused, you'll learn something," he says.

"His is no small job, but to see him in action, it would appear he does so with ease," says Michael Arias, UCI associate executive vice chancellor and former social sciences assistant dean.

Among his major accomplishments as assistant dean, Leinen counts having led a decentralization of the school's management functions to departmental levels in order to create more career paths for staff.

"I think it's really important to not only create and foster a rewarding environment for staff to work in, but also to provide some sort of structure so people are constantly learning and improving their skills in order to move up and be competitive in the job market." He credits UCI for having provided similar growth opportunities throughout his own career path that allowed him to consistently take on new challenges and roles without leaving the university.

"We really have great staff here and it's great when we get to help each other grow and learn - there are days when I learn more from an interaction with a junior staff member or student than I do from a budget or space committee meeting".

In addition to the administrative roles he's held on campus, Leinen's 25 years of UCI service are matched in number by his participation on at least as many UCI committees - opportunities which he notes have been instrumental in giving him a broad perspective on the university as a whole.

"Working with so many different people across campus on areas as wide-ranging as budgets, search committees and overall campus life issues provides a really good understanding of the university and a flavor of what's happening," he says. "It's one of the most rewarding aspects of my job because I get to interact with so many different people and it's the people here who really make UCI a great place to be."

When asked to reflect back on his "temporary" decision to work for UCI, Leinen jokingly says he's still waiting to receive official notification he's no longer being considered for a firefighter position in Orange County. In the meantime, however, the university is extremely grateful to have had Leinen on staff for the past 25 years and will show their formal appreciation for his stellar service at May's Lauds & Laurels banquet.