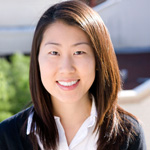 Political science graduate student Kathy Rim says she often felt a disconnect between the history she read about in textbooks growing up and her own history and background as a Korean American in the United States.

"I didn't feel like we learned much about Asian American history at all," she says.

She has been working to fill that gap ever since, efforts which have collectively earned her this year's Alumni Association Lauds & Laurels Award for Outstanding Graduate Student.

"Kathy is a student who represents the best values and the highest standards of achievement that we hope for at UCI," says Bernard Grofman, Jack W. Peltason Endowed Chair in political science and director of the Center for the Study of Democracy where Rim is a graduate fellow.

As an undergraduate at UCI, Rim majored in Asian American studies and pursued coursework to broaden her overall perspective on the culture, politics and history of Asians living in the United States. Now, as a political science graduate student in her fifth year, she is contributing to the very ground level research and scholarship on the Asian American population that is being written into new textbooks.

"It's really exciting to be part of the research being done on my own community where, until recently, little had existed," she says.

Specifically, Rim studies the political behavior and participation of Asian Americans, a group which, despite growing numbers throughout the U.S., California in particular, has historically experienced low voter turnout and participation.

She and other leading scholars note, however, that the tide is turning.

"As a group that now represents roughly 12% of California's registered voters, Asian Americans have real potential to shake up the current political landscape. Most visible is the increasing number of Asian American elected officials serving in prominent political positions throughout California," she says.

Her dissertation research focuses on how racial and ethnic group consciousness shapes Asian American political preferences and behavior, a project Louis DeSipio, Chicano/Latino studies department chair and political science associate professor, says "she designed carefully so that she can speak to the shared attitudes and behaviors of Asian Americans as well as intra-group differences."

She hopes that the results of her research will help individuals and organizations launch more effective campaigns to encourage Asian Americans to join their ranks and support their causes.

According to Carole Uhlaner, a UCI political science associate professor who similarly studies political participation of Asian Americans and other ethnic minority groups, "Kathy's findings have practical implications for political organizers, and they are theoretically important for our understanding of how identity forms and how it functions politically."

Her research on the mobilization strategies and cues that turn Asian Americans on and off, as well as her research on the ethnic group as a whole, has been published in the Asian American Policy Review as well as a book chapter on engaging immigrant groups. She also has articles forthcoming in American Politics Research, Social Science Quarterly, and Urban Affairs Review and has presented her research at several meetings of the American, Midwestern and Western Political Science Associations.

"I have never seen this level of successful scholarly productivity from a graduate student, never mind one only in her fifth year of study," says Mark Petracca, political science department chair.

Rim was recognized for her scholarly work by the American Political Science Association's Asian Pacific American Caucus with the Best Paper Prize, an honor which adds to the growing list she has already received from the School of Social Sciences for academic excellence.

Within social sciences, Rim serves as program director for the public affairs internship program and as a teaching assistant and mentor, roles she says she enjoys because they allow her to help pass on the knowledge and lessons she has learned.

"Because of my positive experiences here at UC Irvine, I know firsthand what it's like to be given an opportunity to pursue an educational dream of a lifetime," she says. Whether it is working with fellow graduate students - several of whom noted that a conversation with Kathy often turns to her generous sharing of time, support and knowledge about getting through the program - to her charitable work halfway around the world supporting educational pursuits of Cambodian students, Rim continues to pass on and create similar opportunities for others every chance she gets.