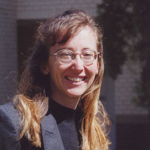 For Pam (Smith) Kelley, winner of this year's UCI Alumni Association Lauds and Laurels Outstanding Community Service Award, the desire to give back to the UCI community stems from her early experiences as an Anteater which began nearly 25 years ago.

An Orange County native, Kelley was the first in her family to go to college. Her experience as an undergraduate political science major, she recalls, was a turning point in her life.

"I benefited greatly from the high quality mentorship and education I received from the social sciences faculty," she says. "My college professors encouraged me to aim high, and the guidance I received at UCI certainly paved the way for law school and legal practice."

In 1992, she returned to California, her law degree in tow, and began working for a Los Angeles-based firm where she met her husband, William. It wasn't long before she made her way back home to the UCI community at the request of political science department chair and former mentor/teacher, Mark Petracca.

"I knew Pam had enjoyed teaching undergrads at Yale and since we were trying to expand the department's offerings in the area of public law, I thought it would be a good fit," Petracca recalls. More than 12 years later - three of which she spent commuting from Los Angeles before relocating with her husband back to Orange County where they started their private practice, Kelley & Kelley - Petracca says he couldn't have been more right.

"Pam has given more than a decade of her energy, devotion, creativity, high standards, intellectual talents and heart to her alma mater as a member of the community," he says.

As a teacher, she impacts the UCI student community on a daily basis, lecturing and mentoring on topics ranging from civil rights, public and family law to teamwork, ethical leadership and writing skills - giving back to her students, she hopes, in much the same way she remembers being mentored by her former teachers-turned colleagues.

Her efforts in the classroom earned her the Social Sciences' Excellence in Teaching Award in 2001, an honor which puts her in like company with Jim Danziger, this year's Lauds & Laurels Extraordinarius. Upon returning to UCI, Kelley says she sought to emulate the "lofty and memorable examples" set by Danziger as well as her former professors and mentors William R. Schonfeld and Mark Petracca.

Her most notable work, however, as many of her current and former students will attest, is her involvement and commitment to the UCI Law Forum, an undergraduate program she helped found in 2001 in order to help students develop the critical writing and advocacy skills necessary for successful careers in law and public policy.

"The Law Forum is a premier program for training student leaders, and Pam Kelley was critical to its creation at UCI," says Barbara Dosher, School of Social Sciences dean. "She is unfailingly engaged with challenging our students to higher standards and promoting teamwork."

The program began humbly, Kelley says, with only six students and two faculty, herself and co-founder and current director Sherilyn Sellgren. The first Law Forum graduation was an informal dinner at Steelhead Brewery across the street from the UCI campus. The program has since grown to include an average of 25 to 30 students each year, many of whom have gone on to law school and subsequent careers as attorneys.

"I'm very proud of the success the program has experienced," she says, although she is quick to note that law school is not the only track she encourages students to pursue.

"We're most concerned with giving students the training and skills necessary to take an active role in their communities, whether as lawyers, public servants or as informed citizens," she says.

Her message has resonated with many students who have come through the program in its eight-year existence including Esthela Chavez, '07 UCI alumna. "Professor Kelley emphasized that a career in law is more than just making money or winning a case. She made it a point to show us by example the importance of using the power and knowledge we gain in order to help the community."

Erin Boylan, UCI alumna class of '05 who credits her successful start as an attorney to Kelley's mentorship and guidance, agrees, adding, "What is most remarkable about Professor Kelley is not simply what she has done for Law Forum but her genuine interest in her students' well being that permeates far beyond the traditional definition of community service."

Her varied interests and passion for serving others has extended beyond UCI and her work as a private practice attorney to her involvement in the wider Orange County community, where she has led discussions and debates for the Irvine Chamber of Commerce and several local high schools. On Camp Pendleton, she developed a civics class for active duty combat Marines recovering in the Wounded Warrior Center in order to engage them in active, critical thinking dialogue and encourage educational aspirations. Through her church, she has helped organize fundraising efforts for Hurricane Katrina and San Diego Wildfire relief, and she been actively involved in the City of Laguna Niguel where she and her husband currently call home.

"The nature of her activities varies greatly for a reason: Pam believes that our opportunities to serve the community arise all around us every day and she never shies away when she believes her skills, energy and experience can provide value for others," says Sellgren who has worked closely with Kelley for the past ten years.

According to Kelley, "I'm honored to be part of a community where these values are recognized."